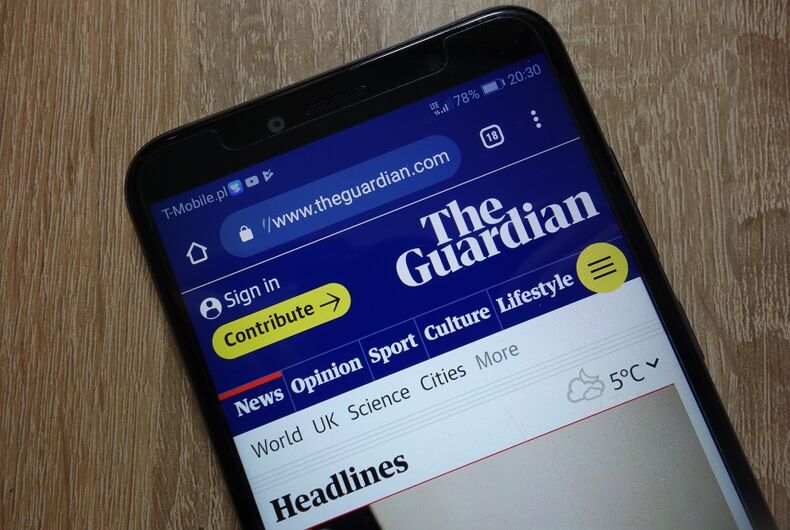 A transgender employee, though, says that it’s not living up to that reputation when it comes to transgender equality. She also said that The Guardian is a hostile working environment for transgender people.

Buzzfeed News obtained a copy of her resignation email, but they did not publish her name, referring to her only as “Victoria.”

Victoria said that she had struggled with her place at the newspaper for months.

She said that one of the most transphobic moments from when she was at The Guardian was an unsigned editorial that said that transgender equality will harm cisgender women.

“While campaigners for trans rights are entitled to push for laws that they believe advance equality, feminists are entitled to question whether such changes could adversely affect other women,” the editorial said. “Women’s concerns about sharing dormitories or changing rooms with ‘male-bodied’ people must be taken seriously.”

“It suddenly became real,” Victoria said. “I’m entering this building with people who are denying my humanity.”

She said that the column made her afraid to use the restroom at work, that she would use it “very quickly, just run to the stall and run back.”

She said that she brought up her concerns with her manager but never heard back. She also said that she was afraid to bring up the topic at meetings.

“I thought, ‘I’m not walking in that room, me, alone against this bunch of people to discuss this. I think they understand perfectly what they are doing. There’s power in that room and power differences – we are not all equals.”

She said that her colleagues also started taunting her. One said, “If you went to prison I’m not sure which prison you should go to.” Another colleague tried to debate her about transgender people’s right to play team sports.

“It allowed me to see first-hand the damage this type of piece causes,” Victoria said.

She also said that the transphobia affected the newspaper’s coverage because there was a powerful group of people “who have an agenda to push.” She said that the newspaper would pounce on any story of a transgender person behaving badly and even published an article that described a transphobe as an expert being silenced by the “trans lobby” for standing up for parents who support their transgender kids.

After months of this treatment, she sent an email resignation to her entire department, accusing the newspaper of being “an incredibly transphobic organization.”

“As a trans person myself I’m often conflicted because while being here gives me immense power to try and fix that, and indeed I’ve seen our reporting get better first hand, it also means I’m supporting an institution that fundamentally not only stands against my own values but also against what I am.”

She said that her boss got mad at her for sending the letter to the whole department.

But she said that The Guardian‘s anti-trans stance is affecting its entire culture.

“It’s hurting our ability to attract people from diverse backgrounds,” she said. Several other employees told Buzzfeed News that the newspaper’s transphobia is affecting morale.

The worst part for Victoria, though, is how it affected her.

“I have lost some trans friends over this, from working with the ‘enemy,’” she said.

“The worst part is that whether I like it or not I have internalized parts of this.”

Late last year, The Guardian US published an editorial that denounced the British newspaper as “transphobic.”