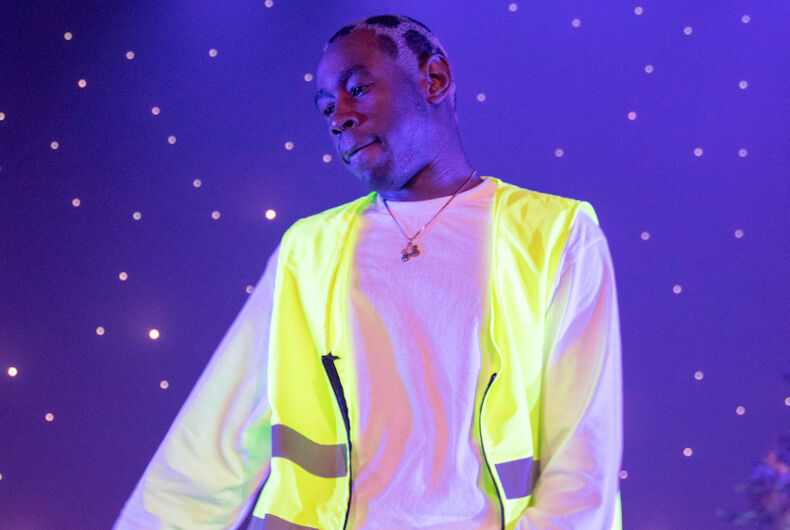 Lil Nas X isn’t the only out gay hip-hop artist making an impact on the music scene. There’s also 28-year-old rapper Tyler the Creator, and unlike Lil Nas X, his raps are much more explicitly gay.

In fact, in a recent impromptu, freestyle rap with the New York-based radio station Hot 97, Tyler spit out some sexual raps that made the host, named Flex, uncomfortable.

Related: Tyler, the Creator: I had my first boyfriend at 15

Tyler rapped, “Free Rakim, free Rakim, I might fly to Sweden to free him. Braid my wig, A$AP on my rib, Switch with him, then I can f*ck all the sweet men that I wanna. Actually I’m gonna, heat it up real quick, mothaf*cka I’m LeBron.”

Then, Tyler’s rap got even more personal and transgressive as he mentioned accused child rapist R. Kelly and having “hot butt sex” with Flex.

“Listen Flex,” he rapped, “we just met but I know it don’t seem like R. Kelly wet dreams I always keep 16. Me and Flex looking in the index for buff net n*gga, just for some hot butt sex n*gga.”

Flex motioned for Tyler to stop and nervously giggled while asking, “What made you go with that verse?”

As he continued freestyling, Tyler said, “This is right off the cock, me and Flex gonna go around the block and he gonna…” at which point Tyler started laughing. He continued:

“I ain’t got much to say so I’m gonna end this shit cause I got a little date with this dude real quick. We going to probably get some ice cream and do ohhhh oh wait a minute, he just got off his damn last shift and he said that his momma can’t do the dishes so he gotta go help her. So I’m gonna go and weep and go look for someone on Yelp, but that’s not a dating app. So what you use? Tinder? Grindr? Get with all your n*ggas and get right behind ’em? What you gonna do? Be like your DM and slide him? Hmmm… Flex sent me an emoji.”

Flex clarified to the audience that he didn’t actually send Tyler an eggplant emoji and Tyler continued, “Me and Flex was cuddled up watching Scooby Doo eating Scooby snacks. He said he wanted my booty. I said, ‘I don’t got ’em.’ He said, ‘Whatever n*gga, I rock ’em.'”

“I keep flirting with Flex and he ain’t trying to f*ck. Now I’m confused. I’m a leave. I just think that he hates me. I thought I came here so he’d date me. He talkin’ bout a freestyle, ooh n*gga f*ck rap, f*ck that. I was trying to take him back and take off that hat. We can be like muah-muah-muah on the lips, but that’s weird as f*ck, man, I’m talking’ bout d*ck.

When Flex tried to pause Tyler’s performance, Tyler said, “Pause, pause. When we leave you you gonna give me info so I call. Say, ‘Link when you back in New York, I’m trying to give away a bike. Maybe we should get some dinner at night.”

Most remarkable is that the rap was heard by a portion of the estimated 3.314 million people who listen to Hot 97 each week.

In his 2017 album, Flower Boy, Tyler made several references to his sexuality. The song “I Ain’t Got Time” includes the lyrics “Next line will have ’em like ‘whoa’, I’ve been kissing white boys since 2004.” The track “Garden Shed” is considered an allusion to concealing his sexual orientation.