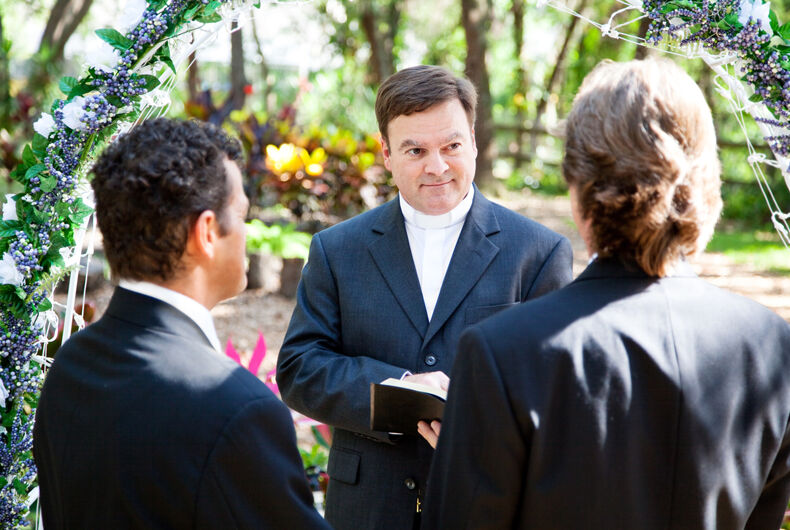 Tennessee lawmakers tried to sneak through a bill that would severely curtail the availability of officiants for marriage ceremonies, including same-sex weddings, but targets of the move have struck back.

SB1377/HB0213 restricts exactly who can perform a marriage ceremony, prohibiting, “persons receiving online ordinations from solemnizing the rite of matrimony.” The Tennessee code, last updated in 1998, did not address anyone ordained online, such as from the American Marriage Ministries or the Universal Life Church.

The newly-amended code, which was supposed to go into effect on July 1, declared that the officiating of marriage requires, “any such minister, preacher, pastor, priest, rabbi or other spiritual leader must be ordained or otherwise designated in conformity with the customs of a church, temple or other religious group or organization.”

Many who oppose the new code believe it was intended to push back against same-sex marriages, by requiring ceremonies to be largely restricted to churches that may not be welcoming of LGBTQ couples.

“There’s no secret that the bill was passed to deter [same-sex marriages],” said Bobby Prince, an AMM minster from Chattanooga to the Times Free Press. “It wasn’t about heterosexual couples.”

The law also specifies that, “such customs must provide for such ordination or designation by a considered, deliberate, and responsible act.” The latter language is based on a 2015 opinion from the Tennessee attorney general, and would bar online services.

Due to the legal challenge, Chief District Judge Waverly Crenshaw has issued an order to bar the new code from taking effect until after the case goes to trial. That is expected by the end of the year. Crenshaw said there are “serious constitutional issues” with the new law.

Meanwhile, American Marriage Ministries, which also offers online ordinations, has sent a team from their home base in Seattle to Tennessee. The group has made several stops in the state to host in-person ordinations, in effect satisfying the new law.