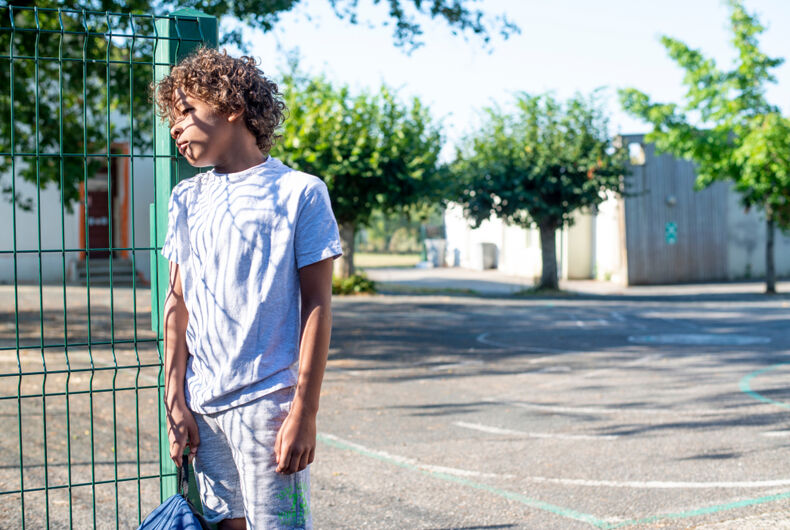 When Bryn Esplin and Fatma Marouf heard about the wretched conditions at the Trump administration’s concentration camps for children, they knew they had enough love to share. They approached a local child welfare agency and offered to foster refugee children, but were turned away for the most insulting reason possible.

The Catholic-run agency told them that their marriage isn’t “holy” and refused to work with them to help get children out of the overcrowded government centers where some are kept in cages and medical care is practically nonexistent. The program is funded by the federal government.

“We were really open in terms of taking in a sibling set, in terms of age of the child—we didn’t really have any specific thing we were looking for,” Marouf told The Daily Beast. “We just felt like we could provide a good home, and there were hundreds of kids needing it in this area, so it just seemed like something we could do.”

“They showed us where the kids were living in their offices, and it just looked very sad,” Marouf said. “I thought, this could be a good opportunity for us to try to foster a child, and it fit really well, it seemed, with my interests in immigration and refugee law, and my experience… I’m familiar with the culture and religion of some of those places, and we just thought it would be a good fit for us.”

But when they met with a representative from Catholic Charities of Fort Worth, they were rebuffed.

“We were told we didn’t qualify because we don’t ‘mirror the Holy Family,’” Marouf said.

Catholic adoption and foster agencies have made no effort to hide their refusal to work with LGBTQ families. Adoption agencies across the country have threatened to shut down if required to follow local civil rights laws, abandoning the children for “moral” reasons.

The webpage for the U.S. Conference of Catholic Bishops clearly states, “placing a child in the care of two men or two women may be well-intentioned, it ultimately deprives the child of either a mother or a father.”

The Trump administration has given religiously-affiliated charities a license to discriminate against LGBTQ people in a wide-spanning arena. From health care providers to adoption agencies, the administration has waged an all-out war on the community.

Lambda Legal is representing the couple as they push back against the administration’s willingness to allow children to languish in the name of religious zealotry. The women have filed a lawsuit that argues that the policy “impermissibly discriminates against same-sex couples who are prospective foster and adoptive parents.”

The complaints highlights medical organizations’ statements that “there is no valid basis for the government to prefer different-sex couples over same-sex couples when considering or approving would-be foster or adoptive parents.”

A judge agreed, squashing a government motion to have the case dismissed. U.S. District Judge Amit Mehta ruled that the women have standing to sue on due process, equal protection, and First Amendment grounds.

“Surely, the government would not take this position if, say, Plaintiffs here were excluded from fostering a child based on their gender… national origin… or religious faith,” Mehta wrote. “The Federal Defendants wish to avoid the responsibility that comes with being good stewards of federal funds. They cannot do so.”

Republicans nationwide have started championing the “right” of adoption and foster agencies to discriminate against LGBTQ people. A handful of states have passed laws specifically intended to give them the ability. A federal law was introduced but languished in the Democrat-controlled House of Representatives.

Archbishop launches inquisition: All LGBTQ teachers must be fired from Indianapolis Catholic schools

Straight people are getting more uncomfortable with LGBTQ people each year