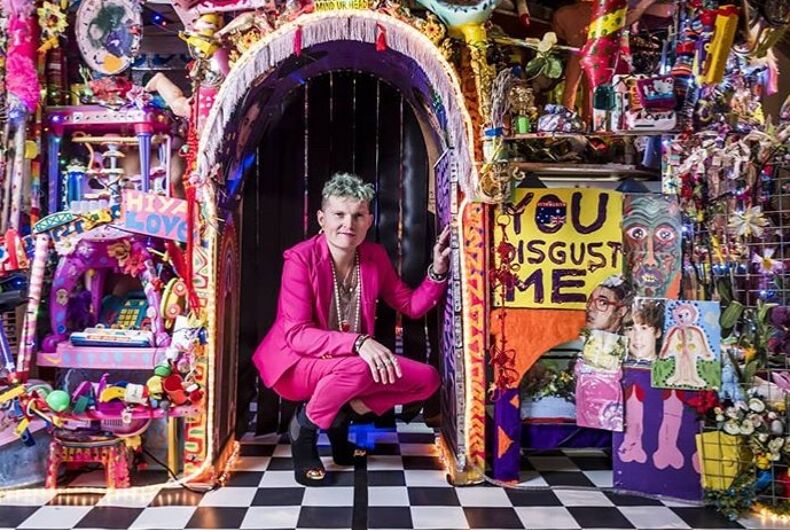 A gay artist’s work has been removed from a gallery after a group of unproductively woke LGBTQ people complained that it was homophobic. They even filed a police complaint that the collage was “hate speech” for highlighting the homophobia common in modern society.

A collage by Australian artist Paul Yore entitled “Taste The Feeling” was being shown at the Mostyn Gallery in Wales this month. The work used common anti-LGBTQ hate speech phrases like “Gays doom nations,” “God hates fags,” and “Leviticus 20:13” and showed a man in his underwear labeled “SUBJECT” being boiled alive by his tormentors, which included globally recognizable symbols of capitalism like Ronald McDonald, Coca-Cola, and Mickey Mouse.

The first complaint came from someone who identified as LGBTQ, according to Yore, but then other complaints came pouring in, calling the work hateful.

Related: This gay painting is now the most expensive work of art by a living artist

He suggested a text to accompany it:

Taste The Feeling is appliquéd from fragments of reclaimed fabric. Drawing on the theatrics of Baroque style, the work defiantly asserts a radical queer subjectivity, using campy craft traditions as a semantic device. Yore’s nightmarish but playful work reflects a debased socio-political context within which spectacle has replaced meaningful dialogue.

That… actually makes a lot of sense? “Subjectivity” – here, used to describe the philosophical idea that something or someone has agency and can act on others instead of merely being acted upon – is something that hatred is intended to threaten.

Subjectivity in the face of hate is an act of defiance. And writing the word “SUBJECT” in all capital letters on a Christ-like man in gay underwear while he is being acted upon by others makes that defiance visible, or maybe it puts the subjectivity into question, depending on how one looks at it.

And, if anything, reclaiming hate speech like Yore does with the framing of the work is itself an act of subjectivity in a culture steeped in anti-queer hate speech.

Considering the history of queer thought that interrogates subjectivity – and the completely separate tradition that stresses the subject in relation to others and even writes the word in all-capital letters – Yore’s text shows that his work isn’t completely out there. There’s a context for it.

“The most contentious elements seemed to be slogans I reclaimed from the infamous American homophobic Westboro Baptist Church,” he said. “All these elements: right-wing populism, meaningless pop-culture and Christian homophobia in my art, directly reflect my own experiences of reality. I grew up queer in a staunchly Catholic household, and my work is my therapy for dealing with a society in which homosexuality is still viewed as aberrant.”

Yore said that he was “shocked and dismayed that the work could be so completely misunderstood” that it was reported to both the gallery and the police.

Ultimately, the gallery decided to take down his work. Police are investigating the showing as “breaching public order” and could have seized the artwork as evidence of a hate crime.

“The accusation that the work somehow constituted a hate crime directed at the queer community to which I belong is upsetting,” he told Gay Star News. “However it is important to remember that there is a great diversity of viewpoints within the queer community.”