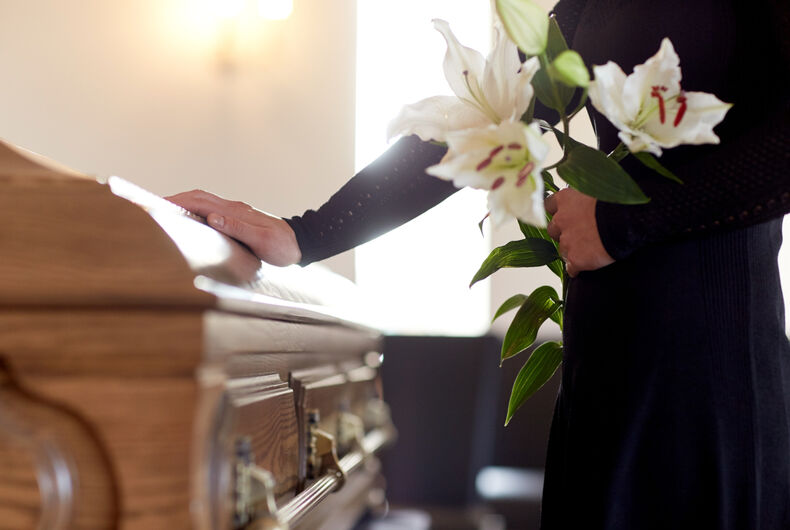 Jay Scruggs, the pastor of Lee’s Chapel Baptist Church in Sweetwater, Tennessee has allegedly refused to host the funeral of Jessie Goodman’s dying 71-year-old father because Jessie is is gay and engaged to another man, his partner, Brandon Smitty.

While Jessie’s father is still alive, he reportedly only has days left to live. His dying wishes included his funeral being held at the above named church and his son singing “The Anchor Holds.”

“As long as I was going to take part in any way, he [Goodman’s father] could not have his service there. They’re punishing my dad for a lifestyle choice I’ve made,” Jessie told the local ABC News affiliate. “Its not me up there in a casket. It’s him.”

Jessie added, “Of course the church doesn’t agree with my lifestyle. And [longtime church member Daryl Morrow] asked me if I would be OK coming and sitting there alone, knowing my partner could not come, and that if he did come, he would be asked to leave.”

Scruggs has refused to discuss the matter until Jessie’s father is buried. The Southern Baptist Convention says that it has no record of the church’s affiliation with their denomination.

Related: Did Westboro Baptist founder Fred Phelps change his mind about LGBTQ people before he died?

Jessie has since found another church willing to host his dad’s funeral. He has said that he will sing “The Anchor Holds.” Its lyrics begin:

Here is a video about the church’s alleged refusal:

A Facebook user wrote to Jessie, “Oh Jesse. This is so sad. I am so sorry you have been treated so poorly. As Christians, we can’t shame people into believing like us. It’s terribly unfortunate that you have been made to feel less than at a time when every single one of them should have reached out to you in love. I am so sorry all the way around.”

U.S. border agents rip children away from immigrants with HIV