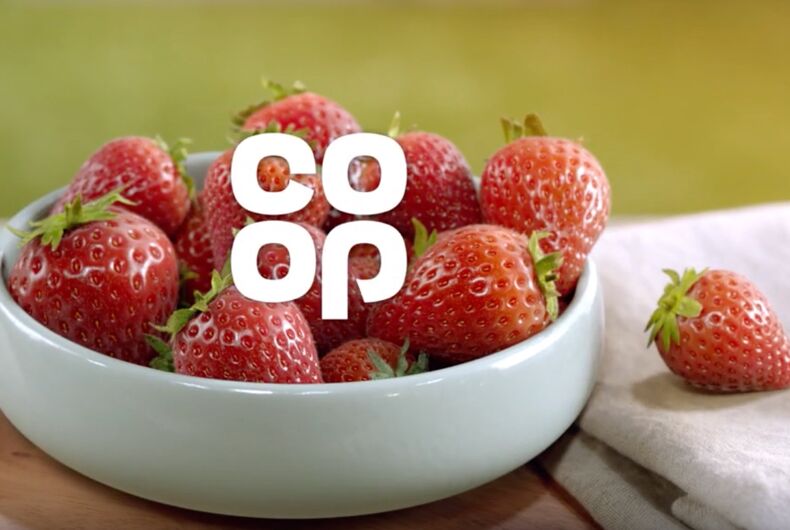 A British supermarket chain is facing backlash from conservatives over a commercial for strawberries. The ad features a transgender woman.

The woman is sitting in front of a mirror at a dressing table and uncorks a bottle of red glitter that transforms into strawberries. She talks about the “delicious, gorgeous fruit” and tells viewers that as part of a special promotion a portion of the proceeds from the sale of the locally grown produce will benefit a local trans pride organization among other selected charities.

“It helps bring LGBT+ people together to celebrate, to show the world that we’re here and we deserve to be loved,” she says in the advertisement before an announcer touts that the berries are grown in Britain.

A shorter version of the commercial was posted to social media and antigay trolls across Europe and America are flocking to thrown in their own hate. The chain, however, has been actively monitoring the comments and replies and quickly deleting the worst of them and responding to most of those sending well wishes (or complaints about the quality of the strawberries).

One person wondered if the strawberries would be in rainbow colors and seemed disappointed to find out they would be “the standard red.” But many furious co-op members (or those claiming to be) say they’ll dump the chain over the commercial for the sweet fruit.

Related: Christian zealots are targeting Toy Story 4 because it will ‘desensitize children’ to gay people

“We should bring them all together worldwide. So much easier to dispose of,” Facebook user Alan Viner, a gentleman with a striking throat tattoo, commented along with emojis for bombs and fire.

Lesley McPhee wrote, “Won’t be shopping at the co-op now. And btw your strawberries are rubbish!” According to McPhee’s Facebook page, she’s a volunteer for Meals on Wheels. Hopefully she doesn’t deliver to any LGBTQ seniors; if seeing a 15-second video of a transgender woman would force her to stop shopping at her local grocer, one can only imagine what seeing a trans person in real life would do to the poor thing.

Danny Robertson, who recently shared a photo of a controversial bus that drove around London years ago emblazoned with a bold lie to convince people to vote for Brexit, highlighted his mental acuity with the comment, ” I think starving kids in local areas would be a better use of that money.”

“Hi Danny. We’ve given £40,000,000 to over 16,000 local causes through our Local Community Fund. The cause highlighted in the video is just 1 of around 4,000 we’re currently supporting,” the chain responded. “Members choose which cause they support.”