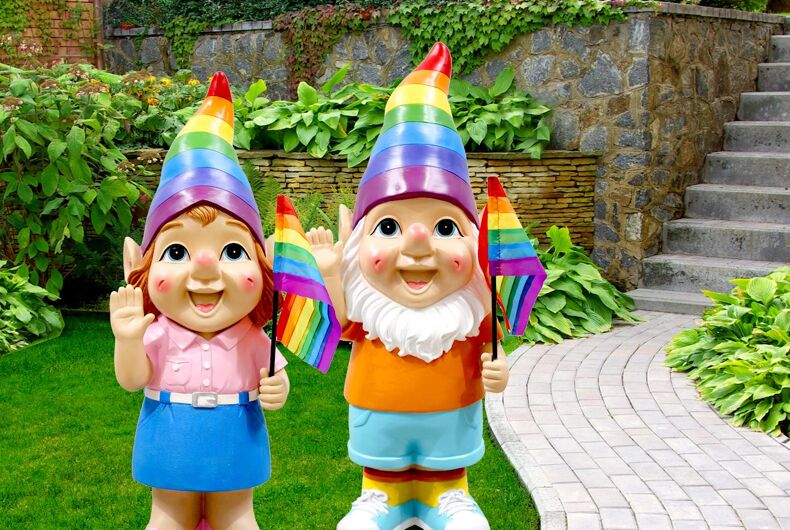 A shopper at a UK supermarket flew into a rage over LGBTQ garden gnomes, apparently angered over the concrete statues’ rainbow flags.

The man was at an Asda last Sunday afternoon, according to Plymouth Live, when the man caused a disturbance over the popular yard decoration. An anonymous witness claims that the man was unaccompanied, aside from having the rainbow-capped gnome shoved in his bag.

“[A man was] causing a disturbance over a gnome, sort of gay pride flag colors, which I’m all for, said the eyewitness. “The guy started saying random things like it’s a gnome, it offended him as they don’t have a sexuality.”

“I’m assuming the guy was offended as they look like they have a gender, that’s the bit I caught of the situation,” the eyewitness added.

Related: Now disgruntled conservatives are boycotting a grocery over an advertisement for strawberries

The gnomes come in a male and female variety, with the former in shorts with a beard, while the latter wears a skirt and has long hair. Both carry miniature rainbow flags and wear pride flag striped caps.

The gnomes were a part of a series of products sold at Asda during Pride month. They began to sell the gnomes in 2017.

According to the force incident manager with the Devon and Cornwall Police, the man was “abusive and loud,” eventually being told to leave the store by officers. He grudgingly complied after some convincing.

An Asda spokesperson corroborated the police version of events, saying that the man in question was “highly aggressive”

“We don’t accept threatening or abusive behavior towards colleagues or customers,” the spokesperson added.

It is unknown if any gnomes were harmed in the incident.