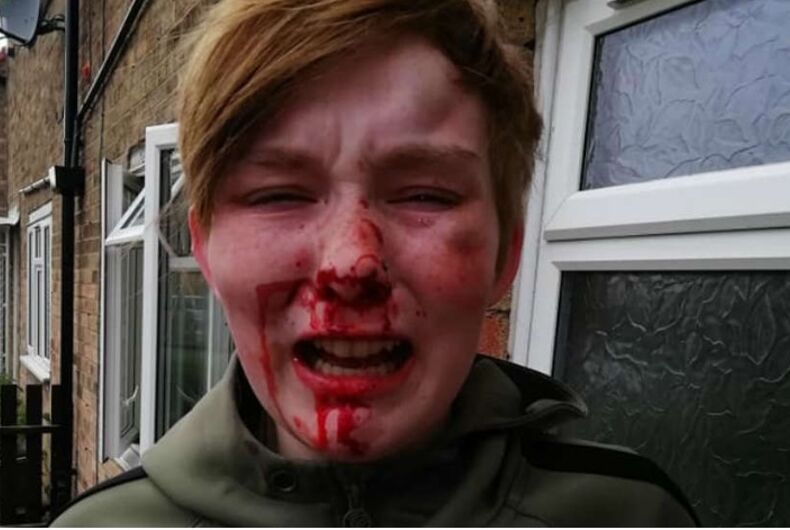 A teenager was left bleeding and bruised after she was beaten up by two other women from her school.

Ellie-Mae Mulholland, 18, of Hull, UK, said that she confronted “one of her friends” yesterday afternoon over some money that the friend owed her.

“She had seen a couple of her friends, who are usually her friends, and one of them owed her a tenner and Ellie asked about it,” Mulholland’s sister Stevie-Leigh Ansell told Hull Live. “The lass said she never had it. Then they both beat [Ellie-Mae] black and blue.”

“Because she is gay they called her a ‘F–king lesbian, you and your girlfriend are going to get it ten times worse next time,'” Ansell said.

Mulholland had to be taken to the hospital to be treated for her injuries. She had a broken nose, two black eyes, and head injuries.

Ansell posted several pictures of her sister to Facebook.

Think you can do this to my sister daft cunts! YOU WAIT!!!!!!!!!!!Happened on boothferry, anyone see this happen as police are involved!! Please share!!

Ansell said the attack was motivated by homophobia.

“I feel I cannot let this happen to my sister because she is gay,” she said. “I just feel really helpless.”

“It is not okay, regardless if she is gay or not, to do this to an 18-year-old. It is absolutely disgusting.”

Ansell said that this isn’t the first time that the attackers have made homophobic comments about Mulholland.

“As soon as they have an argument, it is straight to her being a lesbian,” she said. “Because she smokes they won’t take her cigarettes off her because they say they will get lesbian germs.”

Detective Chief Inspector Ali Sweeting said that the investigation is in its “early stages” and that homophobic attacks will not be tolerated.

“If it is established that there was a homophobic motive we will be treating this appropriately,” she said. “We deal with all hate incidents and crimes thoroughly and do not expect the people of our communities to have to suffer from the intolerance of others.”