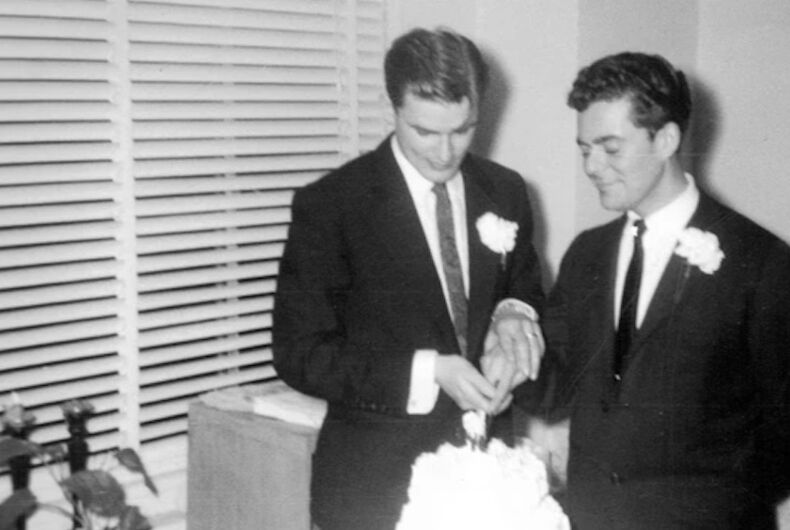 If you recognize anyone in this 1950s-era photo, OurOneStory would like to hear from you.Photo: Our One Story

The daughter of a since-deceased employee who worked at a now-long-gone photo shop in Philadelphia, Pennsylvania recently discovered some photos from a 1957 gay marriage hidden in her mom’s attic. And now Our One Story — a documentary series uncovering the stories behind artifacts from the ONE National Gay & Lesbian Archives in Los Angeles, California — is trying to figure out who the men in the photos are.

Here’s the story: When a man dropped off the gay wedding photos to be developed at the Philly photomat in 1957, the store owner had a policy of withholding photos he deemed “inappropriate,” according to ThePhiladelphiaCitizen.org. The owner also allowed employees to keep such photos.

So while the groom never saw the photos of his happy day, the employee kept them in a box and her daughter discovered them 60 years later. She sold them on eBay and the person who bought them gave them to the ONE National Gay & Lesbian Archives. Now the Archives are trying to figure out the identities of the people in them.

It’s estimated that the 20 and 30-year-olds in the photos are likely to be 80 years old today, if they’re still alive. Thus far, any attempt at identifying the people have turned up nothing.

The photos captured the usual moments: the exchange of rings in front of witnesses, the first kiss and dance, the cutting of the cake and the opening of gifts….

As personal as these wedding photographs are, they also reveal a lot about the time period in which they were created. The photos are taken in what appears to be a private apartment with the blinds and curtains drawn, out of the public eye, perhaps for fear of discrimination and violence. Still, they contain images of joyful celebration, of dancing and laughter. They also may include some clues: A gathering of gay men may indicate the couple worked in professions where homosexuality was more acceptable, like hair stylists and artists. And one man is in drag. “Drag only happens in community and is done with other people who also do drag,” says Anderies.

Our One Story is now inviting people to view the entire set of photos and offer any clues they can.