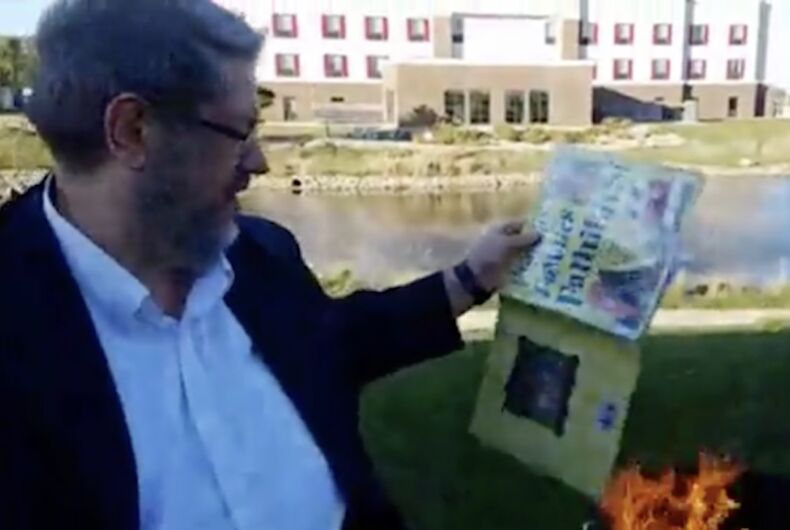 An Iowa judge has refused to dismiss charges against anti-LGBTQ Christian Paul Dorr for his burning of four LGBTQ children’s library books during a 27-minute October 2018 Facebook video rant.

Dorr — the founder of Rescue the Perishing, a group “contending against moral evil to advance the Kingdom of Christ” — had criminal charges filed against him by the Orange City Public Library in December 2018 after he checked out four LGBTQ-inclusive kids books and set them aflame on Facebook live.

According to Newsweek, Dorr was charged with 5th-degree criminal mischief, “a misdemeanor punishable by a maximum sentence of $625 and 30 days in jail.” He is set to stand trial on August 6, 2019.

Representing himself in court this week, Dorr filed a motion to dismiss his case, arguing arrest violated his First Amendment rights. Dorr also said that he was being specifically targeted as other people who did not return their library books had not been arrested.

During his book burning video, Dorr praised Nazis who burned over 20,000 library books belonging to the Institut für Sexualwissenschaft, a German institute founded by sexologist Magnus Hirschfeld and dedicated to the research of homosexuality and trans identity.

Related: Why do hotels put a book calling for the execution of LGBT people in every room?

At the end of the video, Dorr burned four LGBTQ-affirming books that he said he checked out from the local library: Two Boys Kissing, by David Levithan; Morris Micklewhite and the Tangerine Dress, by Christine Baldacchino; This Day In June, by Gayle E. Pitman; and Families, Families, Families!, by Suzanne and Max Lang.

In his video, Dorr said Two Boys Kissing was “designed to get 12-to-13-year-old boys to start having homosexual sex together.”

Mark Stringer, executive director of the ACLU of Iowa, said, “Burning books from a public library is a clear attempt to shut down the open sharing and discussion of ideas. It’s one person, or maybe a group, deciding that they’re the gatekeeper of ideas for the rest of the public.”

The New Republic published a disgusting op-ed about Pete Buttigieg

William Dannemeyer, the U.S. House’s worst homophobe ever, has died