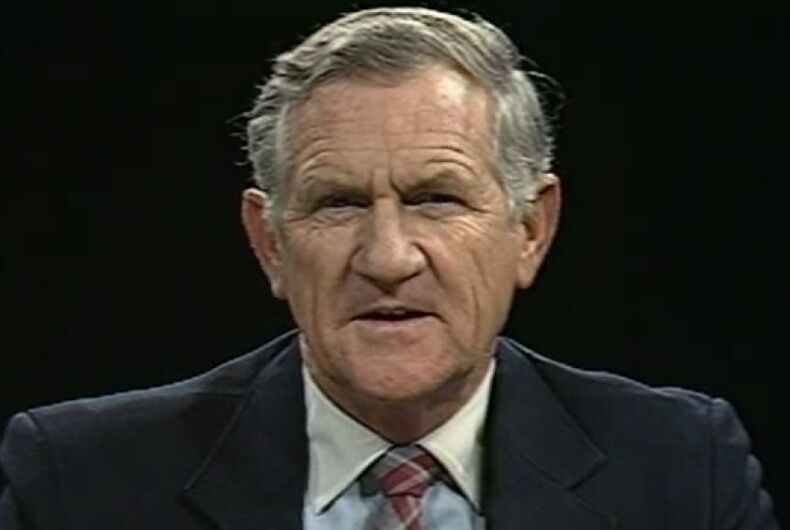 Over the years, there’ve been some pretty awful characters serving in Congress. But no one was as terrible as William Dannemeyer. Only his fellow Republican counterpart in the Senate, Jesse Helms, came anywhere near as close to him for the sheer viciousness of his anti-LGBTQ hatred. Dannemeyer, who died this week at the age of 89, built his career on demeaning, belittling and attempting to punish LGBTQ Americans.

During his 14 years in the House of Representatives, Dannemeyer led an unrelenting attack on LGBTQ rights. He almost invariably referred to gay people as “militant homosexuals” and described being gay as an “alternative lifestyle” and even a “game plan.”

Perhaps the pinnacle of Dannemeyer’s bigotry came in 1989, when he inserted a statement called “What Homosexuals Do” into the Congressional Record.

Dannemeyer insisted that he needed to expose these practices because he believed that “ilitant homosexuals cringe at the thought of what these graphic images mean in the minds of most Americans.”

Instead of his peers rising up in support, Dannemeyer found himself criticized by Democrats and even by other conservatives for being too salacious. “Talk about prurient interest,” complained Democratic Rep. Andy Jacobs Jr. Dannemeyer dismissed the criticism and doubled down on his bigotry.

“I will respect the sensitivities of some of my colleagues concerning the sexual activities of the average male homosexual,” Dannemeyer said. “Let it suffice to say that a bit of reflection will lead a person to recognize that even the lowliest of animals do not wittingly conduct themselves in such a manner. ”

Because Dannemeyer’s tenure corresponded with the rise and height of the HIV epidemic, he fed upon fears of the illness to propose a series of outrageous measures to punish people with HIV. He proposed quarantining people with HIV and said that nurses shouldn’t have to care for children with HIV.

As might be expected for someone with extreme views, Dannemeyer’s proposals were often based on nutty ideas. He was convinced that people with HIV were emitting “spores” that spread the disease through non-sexual contact.

In 1989, Dannemeyer even wrote a book called Shadow in the Land: Homosexuality in America, in which he argued that the success of LGBTQ rights would  “…plunge our people and, indeed, the entire West into a dark night of the soul that could last for hundreds of years.”

Dannemeyer shrugged off being labeled a homophobe. “Why are you a heterophobe?” he said in response. “What do you fear with the normal?”

“I have no intention of apologizing for affirming the heterosexual ethic,” he added.

At the same time, Dannemeyer claimed to feel a touch of sympathy for the people he was attacking — in the most condescending way possible, of course.

“They’re lonely and they’re filled with despair,” he said in an interview in 1990. “In many cases their families have disowned them. Their loved ones, their close friends are dying, they have no place to turn to. And I’ve seen the tragedy in their eyes.”

Dannemeyer represented a district in Orange County, California, that was, at the time, a hotbed of ultra-conservative activity. In the 1980s, Orange County was the headquarters for what was then one of the nation’s leading anti-gay groups, the Traditional Values Coalition.

Even though the GOP was increasingly drifting right, Dannemeyer was a bit too much for most Republicans. In 1992, he ran for the Republican nomination for Senator and lost. He tried again in 1994, with the same result.

Demographic changes have completely changed the landscape in Orange County. All six House seats, including Dannemeyer’s, are now held by Democrats. Hillary Clinton won the county in 2016.

While Dannemeyer is now largely seen as a relic from the past, he was in fact a harbinger of the present. The religious right’s grip on the GOP would have gladdened his heart. Although the rhetoric has been toned down, the basic beliefs remain the same. Defeating “militant homosexuals” (and now transgender people) remains a core Republican value. In that sense, Dannemeyer left a rich — and disgusting — legacy.