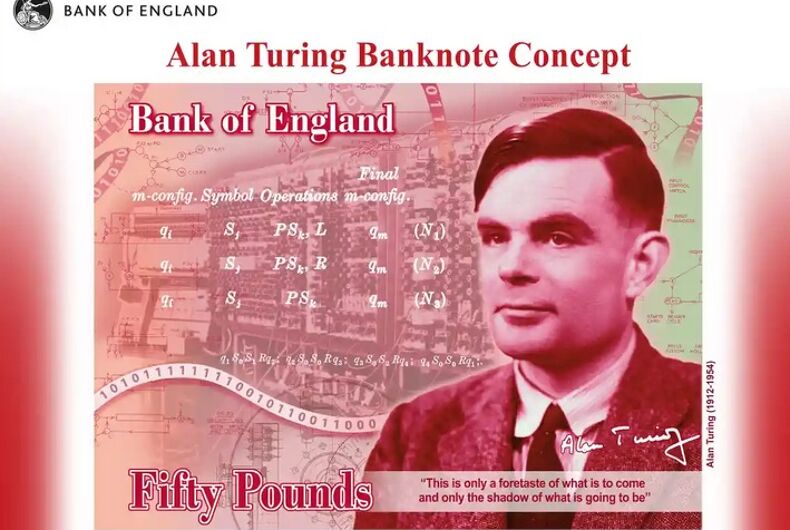 A mock-up of the bank note.

The Bank of England has chosen to honor Alan Turing on the £50 note.

Alan Turing was a gay mathematician whose theories were highly influential in the development of computer science, and his work during World War II helped Allied forces crack coded Nazi messages and defeat Axis forces, a crucial part in winning the war.

After World War II, he was prosecuted because he admitting to having a relationship with another man and was forced to take feminizing hormones. In 1954, he died by suicide at age 41.

Bank of England Governor Mark Carney announced that Turing would appear on the bank note because he “was an outstanding mathematician whose work has had an enormous impact on how we live today.”

“As the father of computer science and artificial intelligence, as well as [a] war hero, Alan Turing’s contributions were far ranging and path breaking,” Carney said. “Turing is a giant on whose shoulders so many now stand.”

In 2013, Queen Elizabeth II pardoned Turing of his gross indecency conviction after a massive petition campaign.

“He set the foundations for work on artificial intelligence by considering the question of whether machines could think,” the Bank of England said in a statement.

“Turing was homosexual and was posthumously pardoned by the Queen, having been convicted of gross indecency for his relationship with a man. His legacy continues to have an impact on both science and society today.”