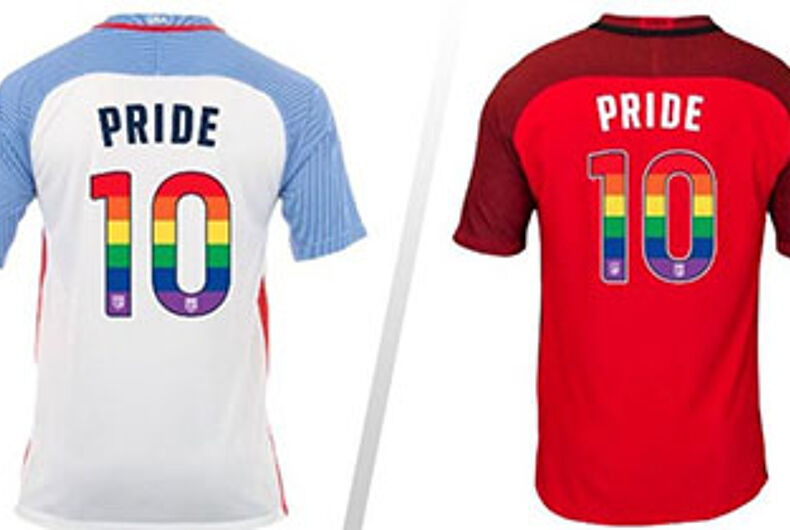 The jersey that compromised the players' Christianity.

Evangelist Franklin Graham is defending a homophobic soccer player on social media, saying that her decision not to join the Women’s National Soccer Team because she refused to promote the idea that LGBTQ people were welcome in sports.

Last week a video of North Carolina Courage player Jaelene Hinkle surfaced on Twitter. In the year-old clip, Hinkle was speaking on Pat Robertson’s 700 Club about how she refused an offer to possibly join the Women’s National Soccer Team because she would have had to wear a rainbow jersey to support inclusivity in sports.

“I just felt so convicted in my spirit that it wasn’t my job to wear this jersey,” Hinkle said last June. “I gave myself three days to just seek and pray and determine what he was asking me to do in this situation… I knew in my spirit I was doing the right thing. I knew I was being obedient.”

Jaelene Hinkle, is the 26-year-old American footballer who gave up the opportunity to be in the USWNT.

I was very curious to know what happened so I went in search of her interview with CBN.

Apparently, the US women’s Football team is not a very welcoming place for Christians. pic.twitter.com/iWXrG4Dkcw

She has had a second fifteen minutes of fame this past month among Christian conservatives as the Women’s National Soccer Team just won the Women’s World Cup in France.

Well, with that clip resurfacing, so did some hard feelings from other soccer players. Out Women’s National Soccer Team player Ashlyn Harris called Hinkle homophobic on Twitter.

Hinkle, our team is about inclusion. Your religion was never the problem. The problem is your intolerance and you are homophobic. You don’t belong in a sport that aims to unite and bring people together. You would never fit into our pack or what this team stands for. https://t.co/XmzKIB88UV

So leave it to women’s soccer’s biggest fan – Franklin Graham – to stand up for Hinkle. Not because he likes sports; but he does love to hate on LGBTQ people.

“Jaelene took a stand for her faith,” Graham wrote on Facebook.

“Jaelene has said, ‘This world may change, but Christ and His Word NEVER will.’ She’s right — and standing with that truth takes courage. Ashlyn Harris needs to understand that believing the Word of God doesn’t mean that you’re homophobic. It means you’re truthful. Jaelene chose her faith above fame, above soccer, and above her peers.”

Ashlyn Harris of the U.S. Soccer Women’s National Team was recently in the news for accusing former teammate Jaelene…

The Women’s National Soccer Team’s victory in France was very queer: out team captain Megan Rapinoe said that she wouldn’t visit the White House if Donald Trump invited the team, the team has at least five LGBTQ players and its coach is a lesbian, and the team’s official Twitter account acknowledged how necessary “gays” were to their success.

So of course some people who don’t actually care about the victory would find a way to take the focus away from the team itself.