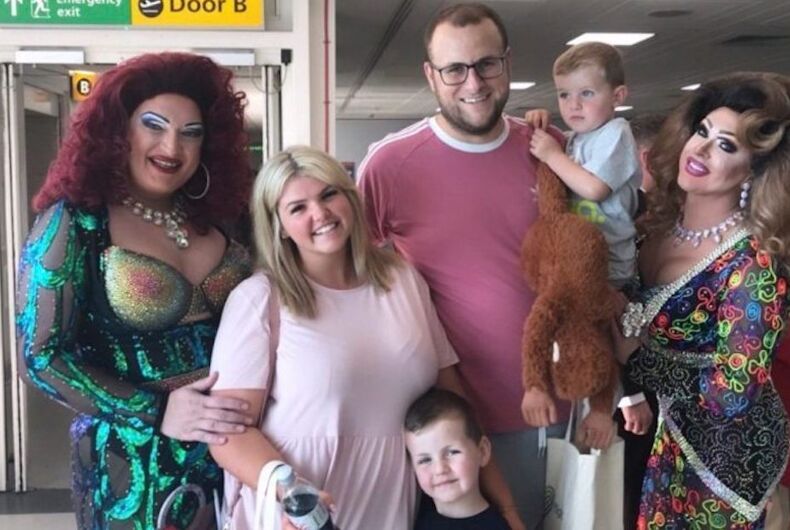 Kerry Powell, her husband Sean, and their sons Calum (4) and Cody (1) with two drag queens at Heathrow Airport.Photo: Kerry Powell

When Kerry Powell and her husband Sean booked a Virgin Atlantic flight from London to New York in September 2018, they were expecting a usual flight into the Big Apple. However, in October, the airlines called to inform them that it had been changed into a Pride flight and would feature drag queens and other entertainers performing for passengers.

The flight was headed to New York City’s World Pride event. It was named VS69, in commemoration of the 1969 Stonewall Uprising.

‘They asked if we wanted to change flight,” Kerry told the media, “which meant traveling on a different day which we couldn’t do, so we went ahead as planned.’

Kerry was traveling with her husband Sean and their sons Calum and Cody. They all ended up having a fabulous time.

An 80-year-old Stonewall veteran named Tree Sequoia was also aboard.

“Tickets for the plane sold out within 24 hours,” according to Metro UK, so the family was kind of lucky. Also, the children seemed to enjoy all the sparkly performers and music acts. At one point, their four-year-old son Calum and one-year-old son Cody jumped up and down in the seats as they played Lady Gaga’s “Born This Way” on the overhead speakers.

Here’s a video of the boys enjoying the music on the Virgin Atlantic Pride flight:

This unsuspecting family accidentally booked on to the @VirginHolidays @VirginAtlantic #PrideFlight for their holiday – and they absolutely COMMITTED to the madness 😂🏳️‍🌈 pic.twitter.com/RyzE3smUiL

“It was brilliant, the kids enjoyed it and the eight hours flew by,” Kerry said.

Tom Holland would be okay playing a gay Spider-Man, but don’t hold your breath