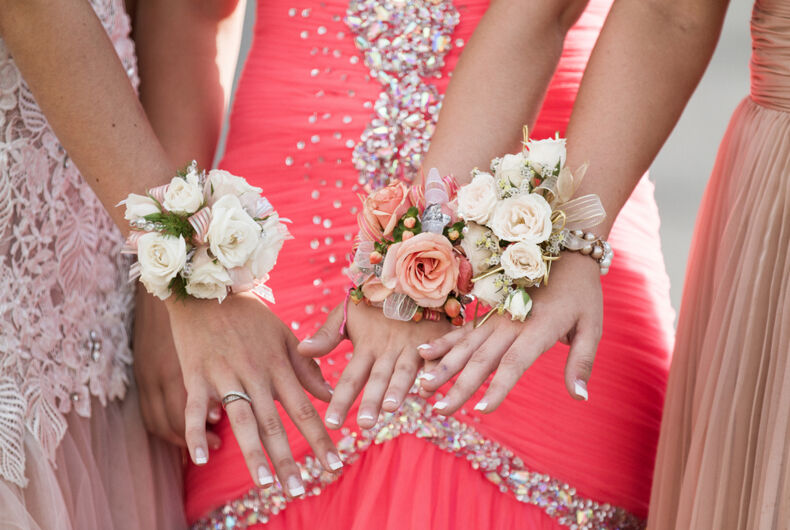 Elizabeth Johnson, aka “The Activist Mommy,” thought she’d scored a decisive victory over an LGBTQ prom when she sent her followers to shut down the Jacksonville, Florida event. Two weeks later, the event, called the Storybook Pride Prom, was held at a new location — a local Unitarian Universalist Church.

The event had originally planned to be held at the Willowbranch Library at the end of June, but Johnson and others — apparently tiring of focusing on drag queen story times — decided to focus on the prom.

On Facebook, Johnson told her 700,000+ followers to “express your disgust that this perversion is taking place in a taxpayer funded library!” She included photos of a featured performer, “BeBe Deluxe,” and the phone number to the library.

Johnson and others caused the library to cancel the event after threats from her followers left the venue feeling they could not guarantee the safety of attendees.

Related: A group of Pentecostal Christians showed up at Pride to apologize for their homophobia

“We wouldn’t be able to make something safe, and we just didn’t think it was responsible to continue with something where the threat was that great,” said Chris Boivin, the assistant director of community relations and marketing at the library, to the Herald-Tribune.

In response, the Buckman Bridge Unitarian Universalist Church stepped in to provide a venue.

“The LGBTQIA+ youth in our community deserve to have their prom and we wanted to support them,” said Grace Repass, the church’s past president, to the Washington Post. “We see our church as a safe place for people who are figuring out who they are. Our Unitarian Universalist values call us to respect the inherent worth and dignity of every person. So, it’s a matter of integrity — to act in alignment with who we say we are.”

In addition to providing the venue, roughly 50 volunteers as well as LGBTQ veterans, private security, and even the Jacksonville Sheriff’s Department served to protect attendees from any further blowback from anyone who might have opted to resort to violence to stop the prom.

BeBe Deluxe, the drag queen whose photos Johnson used in her initial attempt to shut the event down, was left with a serious case of the feels afterward.

“The inside was so positive and electric,” said Deluxe to WJXT-TV. “Everyone was smiling. Lots of moms were crying happy tears. There were kids dancing, laughing and socializing as if nothing had even happened that week. Some of the youth had never met another gay person their age before and this event helped them make friends.”

The event featured a dance hall as well as a pair of rooms for parents and a “quiet room” for those who wanted the experience without the loud music.

“The kids were dancing and laughing and making new friends,” said Deluxe. “Heard from proud moms that some of the youth had never met another gay person their age before and this event helped them make friends.”

Johnson, meanwhile, has opted to not update her post claiming victory, and is apparently not responding to press inquiries for comment.