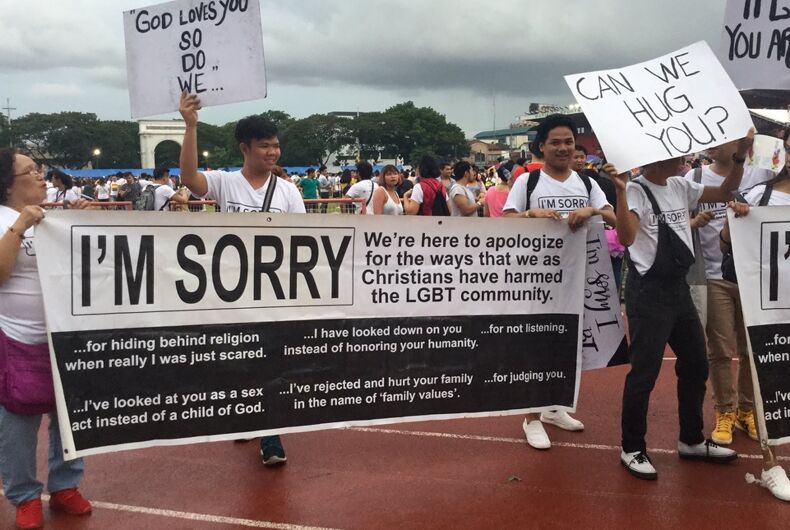 A group of Filipino Pentecostal Christians marched in a Pride parade with an "I'm Sorry" signPhoto: Twitter/Jamila

Christians showed up at a Pride festival with signs that apologized for past injustices.

Jamilah Salvador, 19, posted pictures to Twitter of the signs that she saw at Pride in Marikina City, Philippines.

“I literally cried when I saw this [a little while ago],” she wrote. “Imagine living in a society with nothing but love and respect for each other.”

I literally cried when I saw this kanina. Imagine living in a society with nothing but love and respect for each other. 😢 #RiseUpTogether pic.twitter.com/rL4rPaWHel

“We’re here to apologize for the ways that we as Christians have harmed the LGBT community,” the banner said.

They carried other signs that said things like “God loves you, so do we” and “I used to be a Bible-banging homophobe. Sorry!”

Buzzfeed News reports that the marchers were from the Church of Freedom in Christ Ministries, a Pentacostal church in Makati.

“We are apologizing for the way Christians have hurt the LGBT community, especially by using the Bible in condemning and judging them,” said Pastor Val Paminiano.

“I used to believe that God condemns homosexuals, but when I studied the scriptures, especially the ones that we call ‘clobber scriptures’ that are being cherry-picked from the Bible to condemn LGBT people, I realized that there’s a lot to discover, including the truth that God is not against anyone.”

“God does not discriminate against people based on gender.”

They even had T-shirts that said, “I’m sorry!” on them.

“Some hugged and talked to these Christians,” she said. “Some took photos, like what I did, and others just stood there in awe.”

Paminiano said that Christians should speak out against anti-LGBTQ attitudes.

“We pray that more and more Christians will act, speak, and love the LGBT people like Jesus would.”

The key to queer youth health & happiness is a supportive family