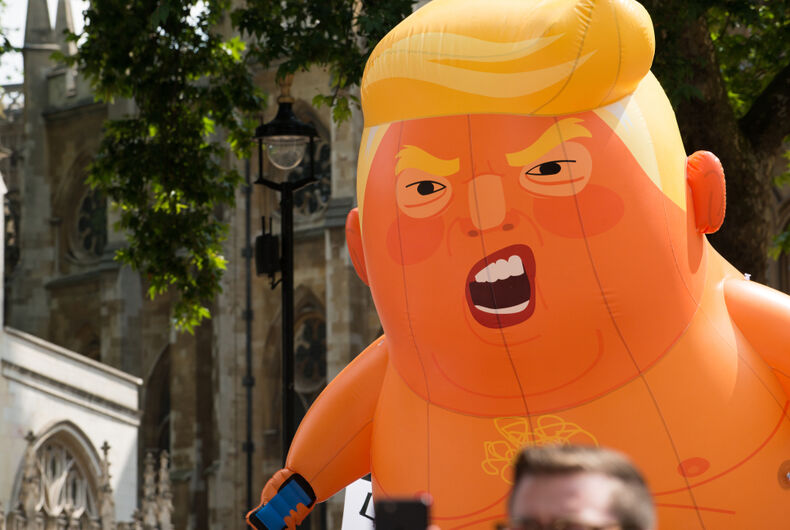 As President Donald Trump launches his reelection campaign, the Stonewall Orlando will host a protest tonight mere blocks away – and the giant orange Baby Trump balloon will be there to greet him.

Organizers rented the anti-Trump protest staple from the owners who notoriously used it to denounce Trump during a trip to London last year. Since then, the giant balloon has made appearances around the world to protest Trump.

“We plan to win with love, and we LOVE Baby Trump,” says Ida Eskamani, one of the organizers of the counter-protest. “The Baby Trump balloon has become an internationally recognized symbol of President Trump’s regular temper tantrums that endanger this country and our desperate need for an adult in the White House. It is also a symbol of resilience; in the midst of darkness, we can find joy in a giant, inflatable baby.”

“This month, we mourn the 3-year remembrance of the Pulse Nightclub tragedy. We also mark the 50th Anniversary of the Stonewall Riots, a seminal event in LGBTQ history, and Juneteenth, the oldest known celebration commemorating the ending of slavery in the United States,” organizers wrote in the protest’s announcement.

“The Puerto Rican diaspora in Orlando, along with our immigrant populations are also part of the incredible fabric of our state. Our communities have suffered immensely due to the President’s hateful policies, corruption, and negligence. Our response will be quintessential Orlando: rooted love, unity, resilience, laughter, and zero place for hate.”

The Win With Love Rally will take place outside Stonewall Orlando (741 W Church St) from 5-7:30 PM. Organizers have posted a map and information for the rally on Facebook where

A summer camp fired his son for being gay. Now dad is leading a parent rebellion.