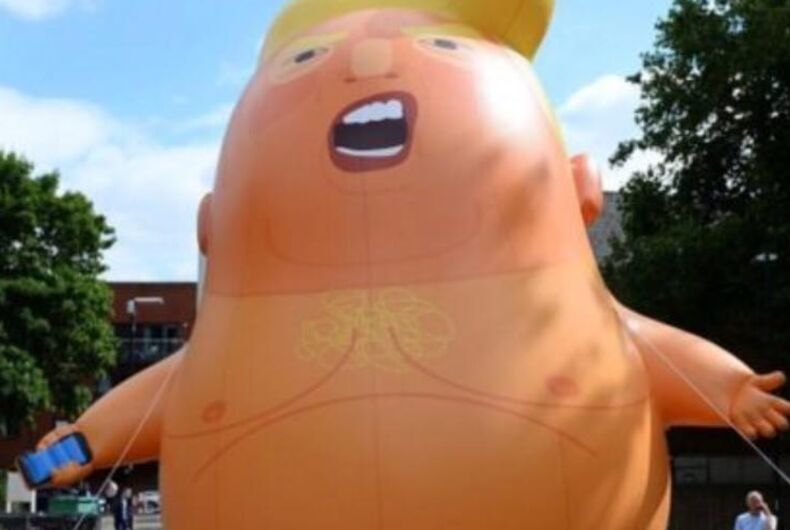 A 19-foot “Trump Baby” balloon floated over Parliament Square in London today as the 45th President visited the city. The orange balloon depicted Trump in a baby diaper holding a smartphone (Twitter, anyone?) while dozens of onlookers cheered from the sidelines.

Leo Murray was the person responsible for the Trump Baby balloon idea. He used crowdfunding to secure £22,000 and 10,000 signatures for a petition asking for permission to fly the blimp over London.  Mayor of London, Sadiq Khan, approved the application for the “mini-blimp.”

“This is a victory,” said Leo Murray, an activist and the creator of the balloon. “People love it, he hates it, and it’s driven him out of London.”

Protesters shouted the usual: “Hey, ho, Donald Trump has got to go” as the Trump Baby balloon floated overhead.

Chant: “ hey, ho, Donald Trump has got to go” pic.twitter.com/9p2qMVvW9o

“Trump is the reason that the whole world order is in disarray,” said Peggy Hudson, 37, a doctoral student. “America used to lead the world, now it’s sending us all down the drain.”

Although Trump took the opportunity to tell Prime Minister Theresa May that U.S.-Britain relations were at “the highest level of special,” one need only to look at the sky to see the reality. This is an unwanted president with an ego filled with enough hot air to float for miles in mockery and shame.

We have take off!

Giant #Trumpbaby blimp is being flown over London by protesters #TrumpUKVisit