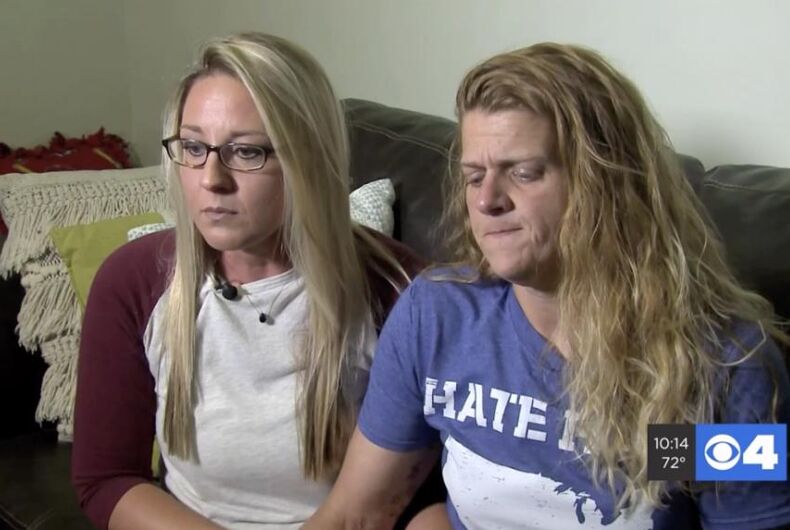 A lesbian couple says a restaurant in O’Fallon, Missouri refused to host their wedding rehearsal dinner upon learning that the soon-to-be-spouses are both women.

Mindy Rackley and Kendall Brown had planned on holding their rehearsal dinner at Madison’s Café — a restaurant that serves, pasta, sandwiches and dessert — because it had been the favorite restaurant of Rackley’s father before he died tw0-and-a-half years ago. However, the restaurant wasn’t welcoming.

Brown told Newsweek, “My mom had made the reservations for us on Monday evening and everything was fine. Then, the next morning, I got a phone call from the owner’s wife and she said she had some questions for me.”

“Her first question was, ‘What is your groom’s name?’ I said, ‘I’m marrying a woman actually and her name is Mindy’.” Brown says the woman on the phone clarified, “Your spouse is a woman?”

When Brown answered “Yes,” the woman on the phone allegedly responded, “I am sorry we are going to refer you to someone else because we don’t condone that kind of relationship.”

Brown adds, “She told me, ‘Out of love for you, we’re going to have to decline your business because we believe you’re in an unhealthy relationship.'”

Only 20 states have public accommodation laws guaranteeing LGBTQ citizens equal access to public businesses. These laws are basically the exact opposite of so-called “religious freedom rights amendments” that allow businesses to discriminate based on religious beliefs.

While some conservatives say that “wedding industry” professionals like bakers, videographers and venue owners should be allowed to turn away same-sex couples with impunity, the problem is that other businesses can easily assume that they too have the right to not “take part in a gay wedding,” even if they’re just asked to serve a same-sex couple.

Sadly, this incident is merely the most recent case of a restaurant discriminating against LGBTQ customers. There are so many more examples of this kind of thing happening pretty regularly.

In December 2018, a South Carolina restaurant put a note which read “fag” into a gay customer’s takeout bag. In June 2018, a Florida restaurant called a lesbian couple “disgusting.” In August 2017, a Washington D.C. restaurant shamed a gay couple for wanting to share a sundae.

In December 2013, a Montreal restaurant kicked out a lesbian couple for their public display of affection. In November 2013, a Georgia restaurant said it has the right to deny entry to a trans woman.

Numerous restaurants have since reached out to Rackley and Brown to host their dinner. Meanwhile, LGBTQ supporters are flooding the restaurant’s Yelp page with negative reviews.

Pride in Pictures: Dublin hosts a 10 day festival for Pride