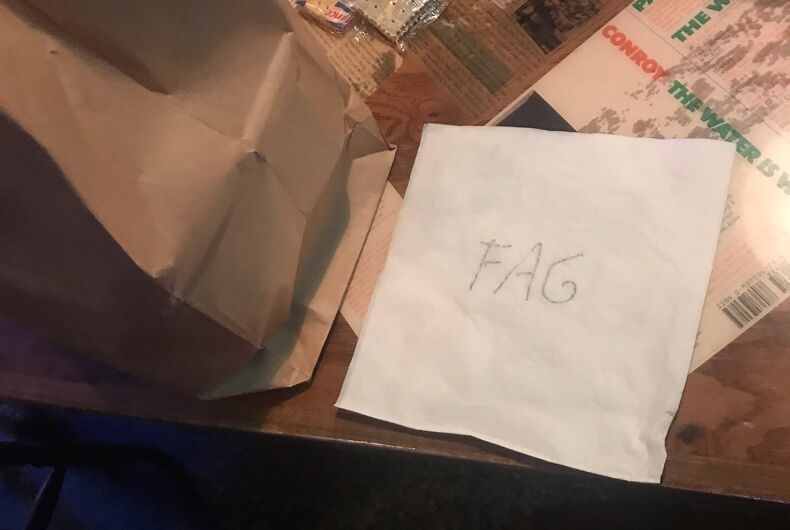 When Cyntrell Jones Legette went to Yesterday’s Restaurant & Tavern in Columbia, South Carolina to celebrate her mother’s birthday, she didn’t expect to have to deal with anti-gay hate speech.

The restaurant is apologizing after a kitchen worker put a note that simply said “fag” in a bag of takeout food for her gay friend who was with the group.

When Legette brought it to the manager’s attention, she says they blew her off, saying it was just a “joke.” But after she posted it to Facebook, the owners are singing a different tune.

“While eating at Yesterday’s Restaurant & Tavern celebrating my mom’s birthday, one of the kitchen workers placed a note in our friend’s bag that said ‘fag.’ The manager tried to excuse this disgusting behavior by calling it a joke,” Legette wrote in the post. “There’s nothing funny about being disrespected. Please don’t patronize them.”

The owners have responded to Legette and the internet outcry by posting an apology on their own Facebook page. They call the incident a “serious matter” and assured would-be diners that the employee in question was terminated on the spot.

In the post, restaurant’s staff say they “deeply regret the incident that occurred this evening involving a customer. It was hurtful and offensive breach of the commitment Yesterdays has made to our community for over forty years to provide an environment that is inclusive and respectful to each and every guest who comes through the door, regardless of color, creed, or sexual orientation.”

“To any past or potential guests harboring doubts about the sincerity of this apology, we look forward to proving ourselves as good as our word. We have had two daily staff meetings to address this terrible breach of our values and intend to have the whole staff in a meeting after the Christmas Holidays when our college staff will be back in town.”

While dining there this evening, one of the kitchen workers found it acceptable to place a note that said "fag" in my friend's bag and the manager tried to excuse it as a joke.

We at Yesterdays Restaurant & Tavern deeply regret the incident that occurred this evening involving a customer. It was…

5 survival tips for LGBTQ people spending the holidays with family

Why is the TSA targeting Queer Eye star Tan France as a ‘security risk’?