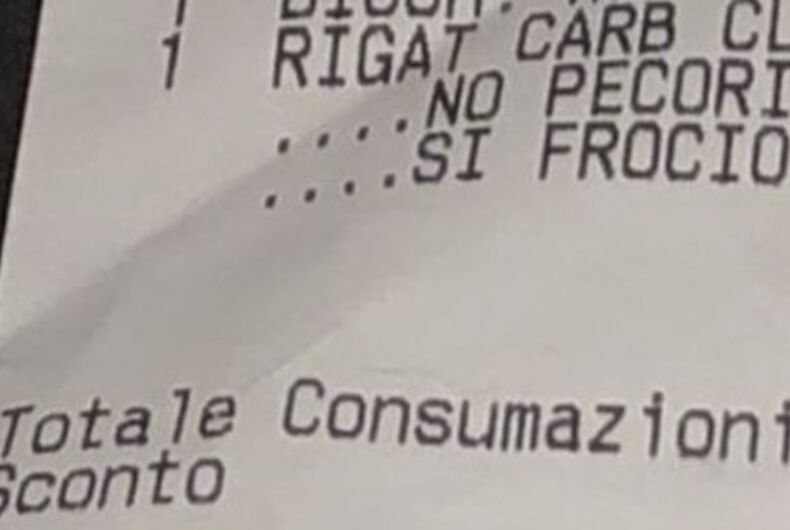 Close up of a slur left on a gay couple's restaurant receiptPhoto: Twitter

When an Italian waiter left a slur on a gay couple’s receipt, he likely had no idea how much mayhem and community outrage would ensue. His petty “joke” may end up costing him both his livelihood and quite a bit of extra cash too.

When unnamed waiter at Locanda Rigatonì took the couple’s order, they asked for parmesan cheese on their dish instead of the usual pecorino. But when they got the bill, they noticed the request was phrased as “no pecorino. si frocia.”

The couple and the restaurant owner differ some in their description of the events that unfolded. The couple say they complained and owner Moira De Luca said it was a computer error and not an intentional insult. She says she apologized right away, comped their meal, and would never condone the insult.

Both agree that the waiter took umbrage at being called out for his blatant homophobia and joined the fray, loudly complaining that the couple’s outrage was “having made a bad impression with the other customers.” He got fired.

After  a picture of the receipt was posted on Twitter, the internet quickly started flooding the restaurant’s Facebook and Yelp pages leaving one star reviews and decrying the incident. And the owners. And the waiter. And anything else they could throw in too.

The restaurant took to Facebook to release a statement on the incident in the hopes of cooling things down. Needless to say, it didn’t work.

“The owners, the staff and the manager have always considered Locanda Rigatoni everyone’s home. We have long been involved in programs of integration of refugees in our restaurant and we officially ask the LGBT community to build together a path to reaffirm the values of tolerance, respect and openness that have always been key to how we run the restaurant,” the statement read.

As news of the incident spread through the media and online, the owner had to close down the restaurant after both pro-LGBT activists and anti-LGBT groups threatened to hold protests outside of the business. One side to castigate the owner and waiter, the other to condemn the restaurant for being too pro-gay for apologizing for the incident instead of supporting the waiter.

Death and bomb threats came in from both sides.

Now De Luca is threatening to sue the waiter for ruining her reputation and destroying her business.

Rome’s mayor has announced the city will investigate the incident and the local chamber of commerce is demanding a seal of approval that businesses provide tourists and citizens a “welcome environment.”

Somewhere in Italy, there’s a waiter wishing he’d just written “substitute for parmesan” on a customer’s order and moved along with his life.