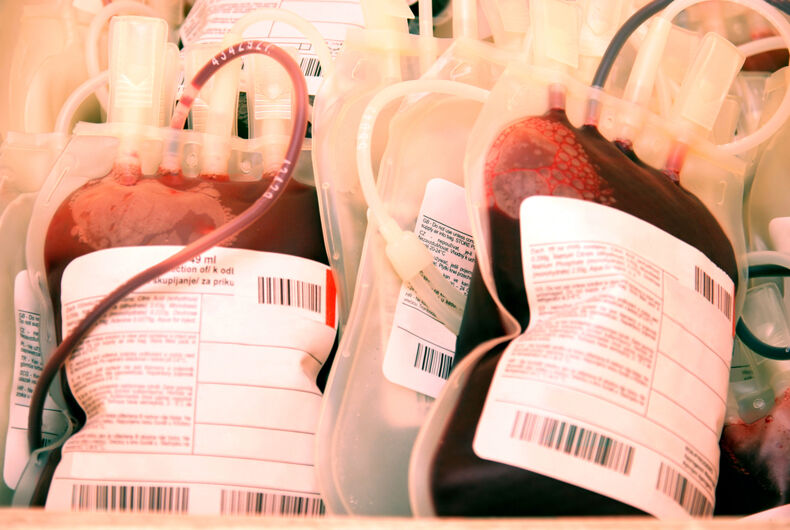 UPDATE: The Belgian Red Cross-Flanders has apologized for their insensitive and disrespectful statements. Their emailed apology is included at the end of the article.

The Red Cross has barred transgender people from donating blood in Belgium over safety fears.

Since the end of April, a questionnaire given to those seeking to donate blood and plasma to the Red Cross has asked, among more mundane questions such as weight and travel, if a person has changed gender. A “yes” response will cause a potential donor to be excluded.

Ine Tassignon, spokeswoman for the Red Cross, addressed their reasoning in a press release.

“At present there is too little evidence that blood donations from transgender people are 100% safe,” said Tassignon “Because safety is super important for both the patient receiving it and for the blood donor, and this is currently not guarantee.”

Related: Trump is already being sued over his plan to allow healthcare workers to discriminate

“We know the biological parameters of someone who is male and of someone who is female, so a man may give more blood in centiliters than a woman, but it is difficult for people in transition to find out how they are anatomically and physiologically,” added Tassignon. “They are not completely male, not entirely female. How should we define that? That must be certain.”

Tassignon pushed back against any concerns that the blood of a transgender person is somehow tainted, a common reason given for both transgender and gay men to be excluded from giving blood elsewhere.

“The exclusion of transgender people as a blood donor does NOT mean that transgender people have bad blood,” said Tassignon. “There is just still too little scientific research to assume that it is completely safe for both donor and patient.”

This blood ban is exclusive to Belgium, and doesn’t change the status of blood donations elsewhere.

“That transgender people are not allowed to donate is a provisional measure,” said Tassignon. “If it turns out that there is no reason to keep them temporarily or forever to exclude everything will of course change, which would in itself be good news because we would then have an expansion of the group of donors.”

That said, Tassignon did note that the World Health Organization lists transgender people as one of five potential risk groups for HIV, alongside men who have sex with men, prisoners, sex workers, and intravenous drug users.

Such bans date back to the earliest years of the HIV/AIDS crisis, during times when tests for the virus were still seen as unreliable. Such policies have been fought against for a number of years, both on behalf of men who have sex with men as well as among transgender people who have often been barred regardless of their sexual activity or lack thereof.

At current, the American Red Cross doesn’t require donors to disclose their transgender status, nor do they currently automatically defer donations from transgender people. Their current policy does allow for a donation if a man has not had sex with another man for more than a year, and this policy also sometimes is applied, incorrectly, to transgender women.

After publication, Luc Botten, Director of Marketing and Communications for the Belgian Red Cross-Flanders, emailed LGBTQ Nation an apology for Tassignon’s insensitive – and incorrect – statements.

“This week a Belgian newspaper reported that Belgian Red Cross-Flanders recently added an additional question to the medical questionnaire for blood donors asking whether the current gender of the donor matches the gender at birth,” Botten wrote.

“Our communication department had a telephone interview with a journalist on the subject. Unfortunately, during this conversation, we did not pay enough attention to the sensitivities in this matter and did not express ourselves in a correct and respectful manner. We therefore sincerely apologize for the fact that during the interview we stated that people in transition are not completely man nor completely woman!”

“In the coming days we will have contact with your fellow organizations in Belgium-Flanders to further discuss the next steps in order to define the most optimal way forward on the subject,” Botten continued. “A dialogue has already been established with these organizations for several months… We will continue these interactions in the upcoming weeks.”

Pride (without) Pictures: South Korea has strict laws about taking photos at Pride