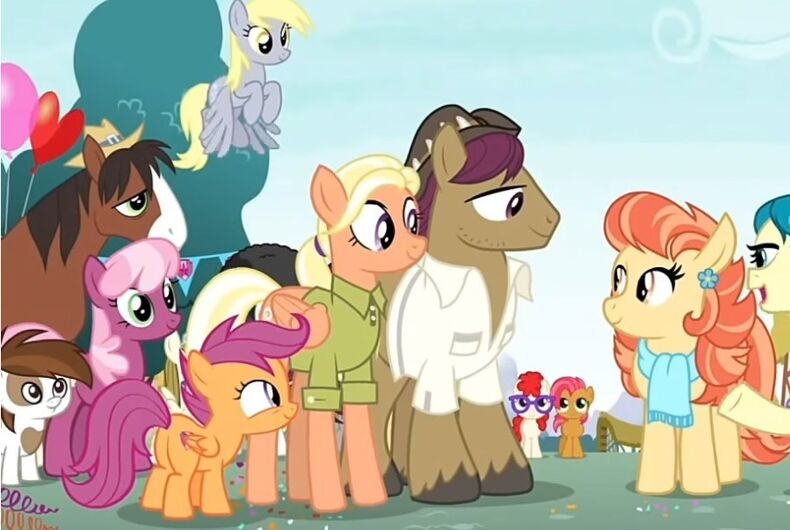 As the hit cartoon My Little Pony wraps up the series after a decade on the air, the show is introducing a lesbian couple – Aunt Holiday and Auntie Lofty. The two female ponies are the guardians of the school-age character Scootaloo.

“The Last Crusade,” written by Nicole Dubuc, will air on Discovery Family this weekend according to Comics Beat. The episode has already aired in Europe.

And the two characters aren’t just thrown into the background without a mention of their sexuality either according to the site.

At first glance one might be tempted to assume it’s a Sabrina the Teenage Witch situation i.e. two adult siblings as the legal guardians of their niece à la Aunt Hilda and Aunt Zelda. But it soon becomes evident that Holiday and Lofty are not siblings or even in-laws but in fact a romantic lesbian couple. In case there’s any lingering doubt Michael Vogel, a writer/producer for MLP and former vice president of development for Hasbro, confirmed their relationship via Twitter.

So how strongly did the writer, who happens to be gay, emphasize that they’re a couple?

Related: Mr. Ratburn came out & got married on the children’s cartoon ‘Arthur’

When I say "cute couple" I'm saying that Aunt Holiday and Auntie Lofty are a cute couple. Yes.

The characters were included in a stand alone book in 2017 and fans have often wondered why they weren’t included in the animated show.

“Nicole and I thought this was a great opportunity to organically introduce an LGBTQ couple in the series, and we asked Hasbro and they approved it,” Vogel told Buzzfeed News.

“I think it’s fantastic that we can show that what truly defines a family is love — that, to me, is the core of My Little Pony,” Dubuc said.

Pride (without) Pictures: South Korea has strict laws about taking photos at Pride