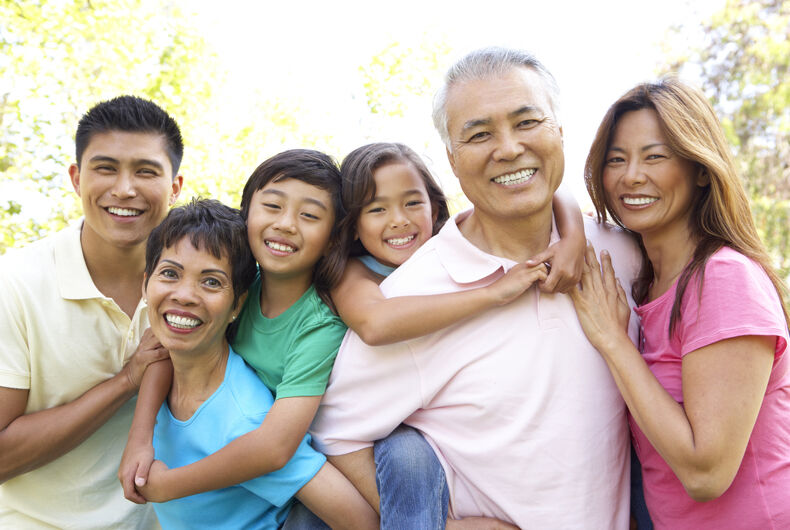 Most parents try to act in ways that help their children thrive. Parents who believe that being a member of the LGBTQ community is wrong, however, may reject their children’s identities, thinking that by doing so, they are helping them fit into mainstream culture.

While the harm of such rejection may seem obvious, it is often not clear to these parents, who are often dealing with outdated societal and familial beliefs of their own. For 17 years, the Family Acceptance Project at San Francisco State University has been using social science data and culturally sensitive strategies to show the families of gay youth the impact of their actions, in ways that turn the families into allies, not enemies.

In the early 1990s, when clinical social worker Dr. Caitlin Ryan reviewed resources to help youth find their way in the world, almost all the professional literature was about risk behavior. There was little focus on the positive or how they could develop into healthy adults. Ryan was a leader in developing the first appropriate, supportive clinical care guidelines for working with lesbian and gay adolescents.

Throughout the 90s, as children began coming out at younger ages, there was still no model to help families understand and appropriately address their children’s developmental, health care, or social needs. Ryan decided to develop a family-based initiative that would combine research, education, intervention, and public policy, launching the Family Acceptance Project with fellow clinical social worker Dr. Rafael Dìaz in 2002.

Their initial research, based on in-depth, qualitative interviews with a wide range of White and Latinx LGBTQ adolescents and their families across California, identified 106 specific rejecting or accepting behaviors, such as not letting children participate in youth groups or, on the other hand, finding positive adult role models.

Ryan and Diaz then measured these behaviors and other experiences through a follow-up survey. They found that young adults who reported high levels of family rejection during adolescence were more than three times as likely to use illegal drugs or engage in unprotected sex, six times more likely to report high levels of depression, and more than eight times more likely to attempt suicide, compared with peers who reported little or no family rejection.

Conversely, young people reported significantly lower levels of suicide and other risks, as well as better health, when families responded with support and acceptance.

This was groundbreaking. Prior research had only studied young people themselves, not their families, and had explored risk, not well-being. Families were seen as adversaries, not allies. Health care providers, social workers, and educators were serving LGBTQ youth alone and through peer support, not by engaging their families.

Ryan and her team used these and subsequent findings to show families—with data, not judgment—how their words and actions impacted their children. To date, they have offered education and training for 92,000 family members, health and mental health providers, clergy, and others across the globe, teaching them how to best support children who are different.

They also developed two short documentary videos—Families Are Forever, about a Mormon family and their gay son, and Always My Son, about a Latino military family and their gender diverse son—to offer visual, culturally specific examples of how accepting and rejecting behaviors can impact youth health. The videos have won a combined 23 awards and been shown to more than 335,000 viewers.

In 2012, FAP’s educational booklet, “Supportive Families, Healthy Children,” available in English, Spanish, and Mandarin, was named the first “Best Practice” resource for suicide prevention for LGBT youth by the Best Practices Registry for Suicide Prevention. To date, FAP has disseminated 600,000 copies across more than 70 countries.

The booklet comes in a version for Latter-Day Saint (LDS) families, written by Ryan and Dr. Robert Rees, a former LDS Bishop. The LDS Church has long been among the most anti-LGBTQ religious organizations—but FAP does not set the LDS faith at odds with supporting children. Instead, it shows how parents can work within the LDS value system, with its strong emphasis on family, to affirm and love their children no matter what.

Wendy Montgomery, an LDS mother profiled in FAP’s video, has told FAP that the booklet helped her feel, for the first time since her son came out, “that it was possible to completely love and support my son while being able to keep the faith I loved.”

In Utah, home of the LDS Church, FAP’s efforts even helped the state amend its suicide prevention law to require training for school personnel about the impact of family rejection on LGBTQ youth. Three weeks after the legislation passed in March 2019, Ryan led the first FAP training sponsored by the state Department of Education—with 200 school counselors and administrators and a waiting list.

More recent FAP research has shown the damage parents do when they send children to “conversion therapy” in a misguided attempt to change their sexual orientation, and how this increases health and adjustment problems for their children in young adulthood. While youth experience harm from any efforts to change or prevent their identity, those who experience such efforts from both parents and others, such as therapists or religious leaders, have the highest levels of risk.

Most efforts to halt sexual orientation conversion have focused on enacting state laws to stop licensed practitioners from engaging in it. Although these efforts are important, Ryan believes we must educate families and religious leaders in culturally appropriate ways to show the harm of rejecting behaviors and the benefit of supportive ones on their children’s well-being.

She explained, “FAP’s research and culturally grounded family support model provides a new language to communicate across cultural and religious boundaries to help families learn to become allies for their kids—even when they believe that being gay or transgender is wrong. This has been the most hopeful work I’ve ever done.”