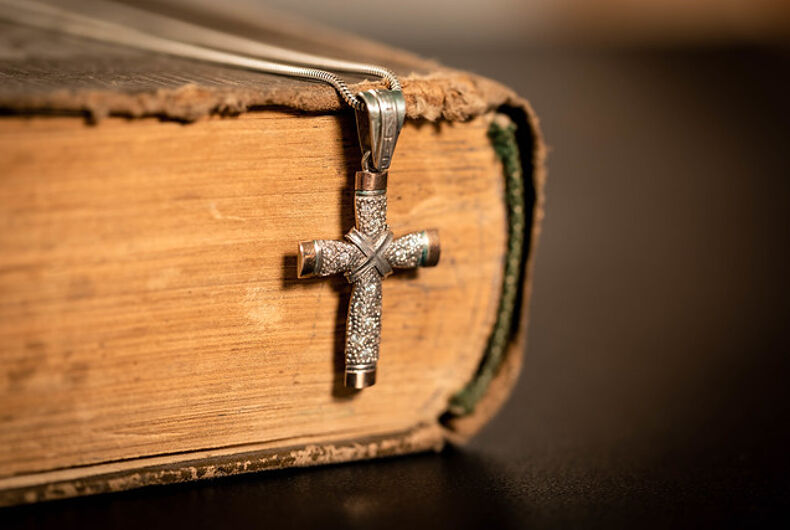 The religious right is hardly a monolith, although it’s easy (and simpler) to think of it that way. As a group, it is composed primarily of conservative evangelicals. But even within that group, there are significant and subtle differences.

Perhaps the biggest difference is around something called Dominionism. Dominionism has multiple names but a single goal: establishing a kind of Christian version of Sharia law.

“The people who belong to this movement go by different names — Reconstructionists, Theonomists, Dominionists — but they all share a common belief: Our republican form of government should be replaced with a Christian fundamentalist theocracy,” says Rob Boston of Americans United for Separation of Church and State told Truthout.org. “They may disagree on what constitutes a proper form of Christianity, but their goal is to ‘reconstruct’ society from the ground up, along ‘biblical’ lines.”

Were it to succeed, Dominionism would be more than disastrous for LGBTQ people. It would be lethal. Dominionists would happily institute a death penalty for homosexuality.

That’s what analysts have dubbed “hard” Dominionism — restructuring American society so that it adheres strictly to a far-right interpretation of the Bible. But there’s also “soft” Dominionism, which is almost just as bad.

Soft Dominionism doesn’t want to rewrite law so that it’s based on the Bible. It simply wants to Christians to take control of the “pillars” of society, including government and culture. In short, it wants to create a theocratic state but within the current structures of society.

As conservatism moves ever further to the right, many of the principles behind Dominionism are increasingly adopted by more “mainstream” religious right figures and the politicians who court them. Once the Dominionist movement was considered the fringe. Not any more.

Of course, their goals are cloaked in less threatening rhetoric. No credible public figure is calling for the Constitution to be rewritten on the basis of the Ten Commandments or for gay people to be executed (although jailing would be okay). But other core principles of Dominionism are now tenets of the religious right and, by extension, the Trump-era GOP.

The primary vehicle for advancing soft Dominionism is the argument for religious liberty. It’s easy to look at advocates of religious liberty and think that they are seeking an exemption to current laws. But in fact they’re actually not looking for an opt out — they’re looking to take control.

The religious liberty argument — that Christians can refuse to follow any civil rights laws that they object to — assumes that believers (at least of a certain type) hold a special place in society, enough so that the law should be tailored to their wishes. It is theocracy in all but name.

There are plenty of GOP leaders who love this very idea. Ted Cruz built his presidential campaign around it. According to a biography of Mike Pence, friends of the vice president believe that “Pence’s ultimate purpose was to establish a government based on biblical law,” even if Pence never said so aloud.

As the GOP is ever more beholden to conservative evangelicals, the urge to embrace Dominionism is only going to escalate. The conservative movement is increasingly disdainful of the trappings of liberal democracy. A recent essay by New York Post writer Sohrab Ahmari decried conservatives who believe that changing society resides with individual actions. Conservatives need to stop embracing civility and understand (as Ahmari insists progresssives do) “that culture war means discrediting their opponents and weakening or destroying their institutions.”

“Civility and decency are secondary values,” Ahmari writes. “They regulate compliance with an established order and orthodoxy. We should seek to use these values to enforce our order and our orthodoxy, not pretend that they could ever be neutral.”

The essay appears in the conservative Catholic journal First Things and approvingly quotes from Archbishop Charles Chaput, one of the most vociferously anti-LGBTQ bishops.

Tellingly, what set Ahmari off was seeing a Facebook post about drag queens reading to children at libraries. While Ahmari doesn’t exactly say what he would do, his essay seems to suggest that the only way for religious conservatives to succeed is to seize the levers of power and use them to institute the moral values they hold. It’s not about winning arguments or even convincing individuals to behave the way religious conservatives would like. It’s about creating societal structures that funnel people into that behavior, whether they like it or not.

This debate is going to last a while, and it will continue long after Trump leaves office. For decades, the GOP has been a mix of social conservatives and free market/Wall Street types. But Trump has tilted the party so far toward the former that they’re shaping the future of conservatism.

Unfortunately, it looks an awful lot like that future is one where the Bible will carry more weight than the Constitution.

L.A. Pride is planning to prepare for a terrorist attack