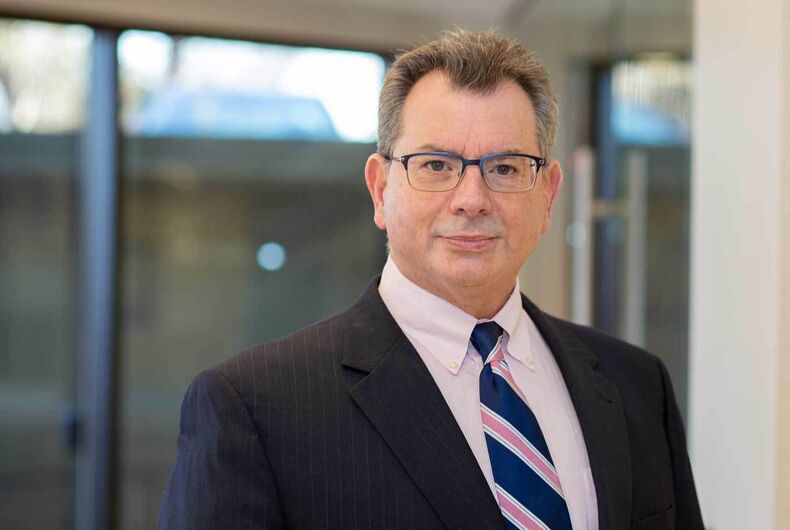 One of the hallmarks of the Trump era is the bottom-of-the-barrel judicial nominees that the Senate GOP has been rubber stamping at a furious pace. So far, Republicans have approved a nominee who backed California’s anti-marriage Proposition 8 and attacked the gay judge presiding over the case, a nominee who asked the Supreme Court to uphold Louisiana’s ban on marriage equality, and a nominee who was a board member of a far right, anti-LGBTQ group.

Along with a long list of like-minded peers, these nominees now have lifetime appointments to the courts, during which time they can reshape the judiciary against us for decades to come.

Occasionally, a nominee will withdraw for being egregiously awful. But now a Trump nominee, Michael Bogren, is in trouble for an entirely different reason: He once argued the case against a couple who were banned from a farmers’ market for refusing to host same-sex weddings.

That’s right. He opposed people who discriminated against same-sex couples based on their religious beliefs.

Representing the city of East Lansing, Michigan, Bogren wrote a legal brief saying that the couple, who had cited their religion as a reason not to allow same-sex weddings on their farm, didn’t deserve to win their case. But what has set Bogren’s opponents off is that he compared the couple to other bigots from the past. He said, for example, that a member of the KKK couldn’t employ the couple’s same argument as a reason to deny services to an interracial marriage.

“An adherent of that particular brand of Christianity who ran a business similar to the plaintiffs’ business would not be able to invoke the free exercise clause to avoid the anti-discrimination provisions of Federal, State and local laws that apply to public accommodations if interracial couples were refused service,” Bogren wrote.

That analogy has not gone over well with some of the religious right’s water carriers in the Senate, including Ted Cruz and Josh Hawley. They have vowed to oppose Bogren’s nomination. In fact, 70 conservatives, including hate group leader Tony Perkins, have signed a statement calling on Trump to withdraw Bogren’s nomination.

At his hearing nomination, Bogren argued that he was representing the views of his client when he wrote the notion. Grandstanding senators weren’t having it, with Hawley complaining that Bogren showed “impermissible hostility” toward religion.

Bogren may still manage to eke out a confirmation, but his odds look slim. It seems that the only way to win Senate confirmation is to be reliably anti-LGBTQ, and on that count, Bogren failed.

The extreme fringe of the religious right is gaining political ground