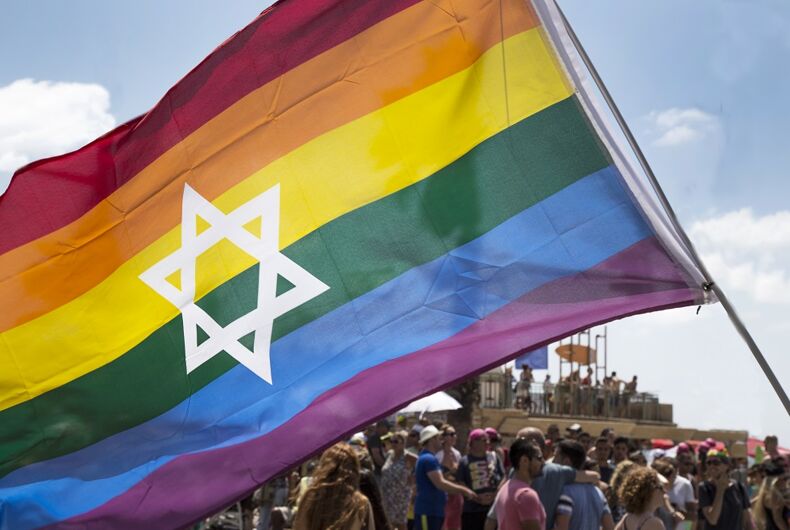 Organizers of the D.C. Dyke March have come under fire for banning rainbow flags with the Star of David on them.

The Dyke March, which will take place next Friday after over a decade in hiatus, is meant to be a more radical march than the Capital Pride Parade.

The controversy started when A.J. Campbell, 50, contacted the organizers to ask if she could bring her rainbow flag with the Star of David on it, a flag sometimes referred to as the Jewish pride flag. The flag proved controversial at the Chicago Dyke March in 2017, so she wanted to be sure.

The organizers said that they banned all “nationalist symbols” and specifically flags of “nations that have specific oppressive tendencies.” They said that this includes the rainbow flag with a Star of David because it resembles the Israeli flag, as well as the American flag with rainbow stripes that sometimes appears at Pride festivities.

Related: If Jews can be expelled from Chicago’s Dyke March, who’s next?

“I just thought, the Chicago Dyke March is happening all over again — here,” Campbell said, saying that she has carried the flag at other Pride marches. “I’ve been a Jewish lesbian for a long time, and it’s never been a problem…. They seem to have very specific ideas about what kind of Jew I’m supposed to be, and I don’t feel like they get to say that.”

The ban has been condemned by the Anti-Defamation League, an organization that fights against anti-semitism.

“It is outrageous that in preparing to celebrate LGBTQ pride, the D.C. Dyke March is forbidding Jewish participants from carrying any flag or sign that includes the Star of David, which is universally recognized as a symbol of the Jewish people,” said ADL CEO Jonathan Greenblatt in a statement.

“Banning the Star of David in their parade is anti-Semitic, plain and simple. The LGBTQ community and its supporters are diverse, and that is part of its tremendous strength. We call on the organizers to immediately reverse this policy.”

Yael Horowitz and Rae Gaines, two of the organizers who identify as Jewish dykes, wrote a piece in the Washington Blade to explain their decision.

“The claim is that we are banning Jewish symbols, which is entirely untrue,” they wrote. “We are asking people to not bring nationalist symbols because violent nationalism does not fit with our vision of queer liberation. And because we need the march to be a space that is as welcoming to Palestinian Dykes as it is to Jewish Dykes.”

They wrote that Jewish symbols, including the Star of David if it’s not on a flag, are welcome at the Dyke March.

“When we hear allegations that the Dyke March is anti-Semitic for taking a pro-Palestine stance, we feel betrayed by the Jewish community,” Horowitz and Gaines wrote.

“We choose to prioritize Palestinian lives and justice in Palestine over lazy symbols. The Dyke March is about welcoming our whole selves, not about welcoming the politics that harm members of our community.”