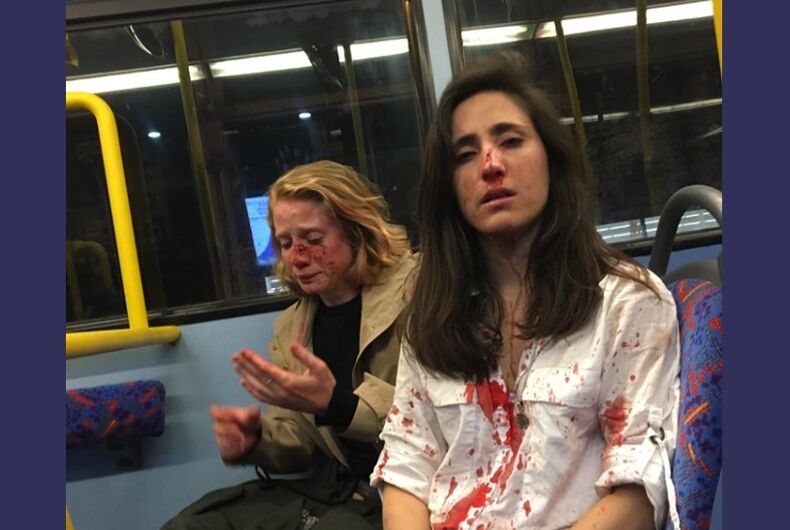 Two women in London were attacked in a bus when they refused to kiss for straight men’s viewing pleasure.

Melania Geymonat, 28, and her girlfriend Chris were taking a night bus in London on May 30.

According a Facebook post Geymonat wrote about the incident, she kissed Chris and then four young men started harassing them. The couple and the young men were alone together in the top level of the bus.

“They started behaving like hooligans, demanding that we kissed so they could enjoy watching, calling us ‘lesbians’ and describing sexual positions,” she said. “I don’t remember the whole episode, but the word ‘scissors’ stuck in my mind.”

She said that she started making jokes, hoping to break the tension and to get the men to go away, but they didn’t. Instead, they started throwing coins at the women.

“The next thing I know is that Chris is in the middle of the bus fighting with them,” Geynomat wrote. “On an impulse, I went over there only to find her face bleeding and three of them beating her up.”

The men started punching her, and she may have lost consciousness. She said that before she realized what happened, police were on the bus and she was bleeding.

She found that their phone and bag had been taken.

Both victims were taken to the hospital for treatment.

The mayor of London, Sadiq Khan, denounced the attack on Twitter.

“This was a disgusting, misogynistic attack,” he wrote. “Hate crimes against the LGBT+ community will not be tolerated in London.”

This was a disgusting, misogynistic attack. Hate crimes against the LGBT+ community will not be tolerated in London.

The @metpoliceuk are investigating and appealing for witnesses. If you have any information – call 101. https://t.co/4zSqxyE6IP

“I’m tired of being taken as a sexual object,” Geymonat wrote. “We have to endure verbal harassment and chauvinist, misogynistic, and homophobic violence because when you stand up for yourself shit like this happens.”

She said that she wanted to share the picture of her after the attack because “violence has become a common thing” and people don’t pay attention otherwise.

“Sometimes it’s necessary to see a woman bleeding after having been punched to feel some kind of impact.”

Pride in Pictures: Johannesburg’s Pride parade is the biggest in Africa & there’s a reason why