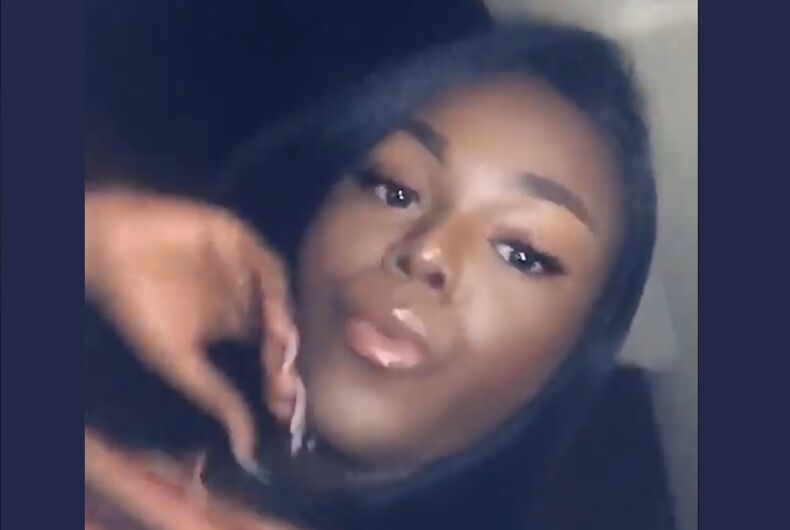 A Black transgender woman was found murdered in North Carolina this past Wednesday.

Chanel Scurlock, 23, was found just after midnight when Robeson County Sheriff’s Office deputies arrived after receiving reports of gunfire in the area. She had been shot.

Police said that her car was missing at the time of her death but that it was found later in the day. They did not say where.

The police, local media, and Scurlock’s mother identified her as a gay man, misgendered her, shared pictures of her presenting as male, and deadnamed her in media reports. Robeson County Sheriff Burnis Wilkins went so far to refer to her as “Mr.” in a Facebook post.

Her Facebook account, though, uses “she” pronouns and the name “Chanel,” only has photos of her presenting as female, and her friends referred to her as a woman.

“You lived your life as you wanted,” Kandice Stigger, a friend of the victim, wrote on Facebook. “I’m proud of you for being unapologetically correct about your feelings and expectations of YOU.”

Blurred lines. Who ever thought this would be the last time we talked. RIP baby. Chanel Scurlock You lives your life as…

According to her mother Brenda Scurlock, Chanel Scurlock went out on Tuesday evening to confront a person who had taken her Facebook page down.

She “made a connection with a guy that took [her] page down,” Brenda Scurlock said.

“I was surprised that [she] would go meet somebody that took the page down because that’s a red flag right there,” she added.

Scurlock is the ninth transgender woman known to have been murdered in 2019 in the U.S. All of them have been Black.

Police have not said yet if there are any suspects in the case or if any arrests have been made. They are asking that anyone with information contact the Robeson County Sheriff’s Office at 910-671-3170.