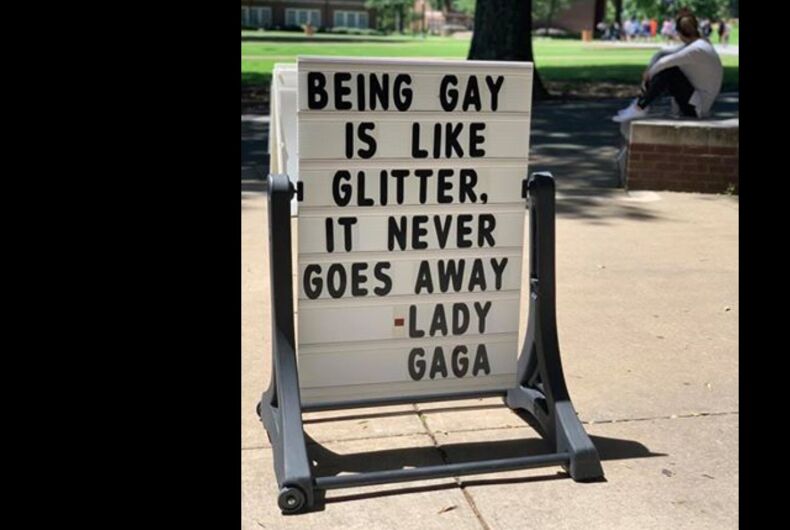 This sign at the University of Central Arkansas library was so dangerous to minors, the president forced them to take it downPhoto: Facebook

The University of Central Arkansas found a cheeky way to celebrate pride month, only for the university’s president to demand its removal.

A signboard with removable letters routinely sits outside the Torreyson Library on campus, and library staff update it regularly to celebrate holidays and birthdays, as well other news and information.

This month, they decided a quote from performer Lady Gaga would be a nice way to honor their many LGBTQ students and faculty. The quote they chose was a largely non-confrontational one that would likely raise a smile from most passersby.

“Being gay is like glitter. It never goes away,” it read.

Related: Valedictorian of Utah’s most homophobic university comes out during graduation speech

We have so much love & respect the LGBTQ members of our community. 💜 Here’s a link to our LGBTQ+ resources libguide: http://uca.libguides.com/lgbtq🏳️‍🌈Happy Pride🏳️‍🌈

They included a photo of the sign, as well as a link to the library’s resource guide to LGBTQ issues on the library’s Facebook page.

“The UCA Library is dedicated to maintaining a safe and inclusive space for everyone,” reads that page. “We value the needs, cultures, abilities, and experiences of all individuals, encouraging civility and open discourse in our facilities, collections, services, and people.”

Not everyone valued the quote however, or felt that it helped encourage civility on campus.

University of Central Arkansas President, Houston Davis, ordered the sign removed just one day after it went up, claiming, “we do have to be very careful that we walk the fine line between individual freedom of speech and institutional voice.”

In Davis’ statement, he claimed that it was “not only appropriate but very important” to advocate for the LGBTQ community, but argued that the sign itself was not the place to “advocate for a personal viewpoint.”

Davis also argued that the sign could harm children who might be visiting the campus during the summer, potentially causing them harm over a quote comparing homosexuality to the difficulties of managing glitter.

“Timing of the sign in the summer also was considered. We have to be very mindful of the hundreds of minors that are on campus during the summer which further complicates an environment that is normally programmed for adults and our very meaningful conversations about ourselves and our world,” said Davis.

Students, faculty, and alumni have flooded the library’s Facebook page to voice their displeasure with the decision.

This is absolutely shameful,” wrote university alumni Sarah Zembo. “I am disheartened by the actions of the university administration and the subsequent ‘excuses’ provided for why this sign was removed. I was an employee of the Torreyson Library during my time at UCA and just want to say that I respect and honor the library and the wonderful people who work there who put this sign up- keep doing the great work you do!!

Another poster, Rachel Winne McAdams, thanked the library for their advocacy, adding “When people are being murdered daily for being trans, and kids are taking their own lives because they’re gay, our institutions, like universities, are in many cases, LIFE SAVING. Creating space on campus for ‘the other’ is never something that should be seen as advancing a personal agenda.”

“I applaud the library,” McAdams added. “I’m ashamed of the administration, but not at all surprised.”

The library has continued to advocate for its LGBTQ users, promoting books and movies appropriate for pride month via Facebook.

Davis, meanwhile, has replied further to the controversy via email to the university, saying he would be meeting with librarians, LGBTQ advocates, and other concerned individuals over the sign.

“I understand that the removal of this quote has caused fury and sadness across campus,” wrote Davis. “My observation that the library sign is a university platform and should be reviewed as such has morphed into a debate about UCA’s values and commitment to diversity.

Davis added, “I am very sorry that this has been the outcome and that anyone has felt unwelcome or silenced. That was certainly never my intention. We are absolutely committed to supporting our LGBTQ students and our entire campus community.”