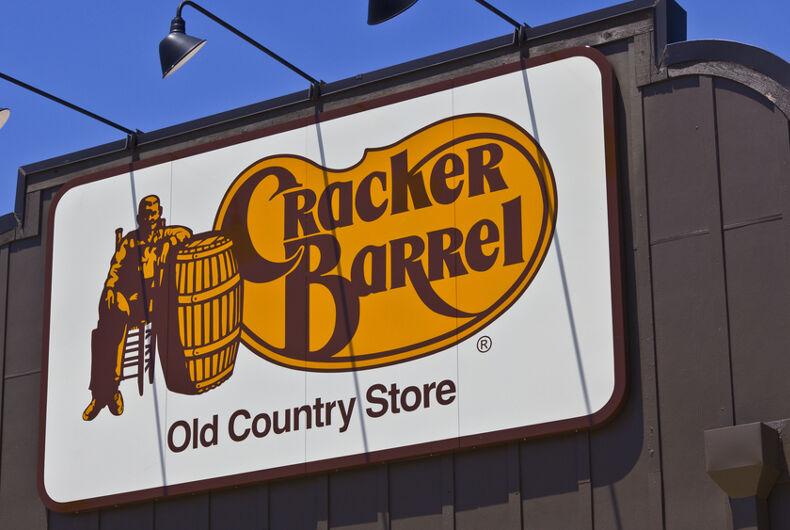 Cracker Barrel, the country restaurant chain, recently refused to let an anti-LGBTQ pastor hold an event at one of their locations. But considering that the chain once had an openly anti-LGBTQ employment policy, does that mean they’re now allies? Let’s take a closer look…

Grayson Fritts — the pastor of Knoxville, Tennessee’s All Scripture Baptist Church — had planned on holding a June 29 church event at Cracker Barrel location in Cleveland, Tennessee. But when the Tennessee Democratic Party heard about the event, they contacted Cracker Barrel’s corporate headquarters with a publicly posted letter which read:

“Among other statements anathema to to the standards and values of this great country, Pastor Fritts said members of the LGBTQ+ community are ‘freaks’ and ‘animals’ and ‘are worthy of death’… [calling on] the United States government to carry out death sentences against the community.”

“[We] are not affiliated in any way with Mr. Fritts or All Scripture Baptist Church and we disagree strongly with their statements of hate and divisiveness. We are not hosting any event on June 29 and Mr. Fritts and his group will not be permitted on site….

We work hard to foster a culture that is welcoming and inclusive — we have a zero-tolerance policy for discriminatory treatment or harassment of any sort.”

In 1991, Cracker Barrel had a policy allowing managers to fire gay employees. At least 11 gay and lesbian employees were fired under the policy. The New York Times explains the company’s reasoning at the time:

Cracker Barrel was founded on a “concept of traditional American values.” Continued employment of those “whose sexual preference fails to demonstrate normal heterosexual values which have been the foundation of families in our society” appears inconsistent with those values and the “perceived values of our customer base,” it said.

Although the company got rid of the policy shortly after it received national attention, the company’s support for LGBTQ has remained less than perfect.

In the 2008 Human Rights Campaign Corporate Equality Index (HRC CEI) — a measure of companies’ pro-LGBTQ policies — it received a 15 out of 100 score which then increased to 55 in 2011 after the company instated a non-discrimination policy and diversity training which included sexual orientation.

But in 2013, its HRC CEI rating dropped to 35 because it lacked transgender-inclusive benefits, non-discrimination policies for gender identity and health benefits for partners of LGBT employees.

In 2018, Cracker Barrel had an HRC CEI rating of 65 out of 100. The company lacks equal employment policies based on gender identity, trans-inclusive healthcare, no clear-cut data collection on LGBTQ employees nor does it have guidelines for supporting gender transitioning employees.

This year, they got an HRC CEI rating of 80 out of 100. They lost points for lacking equivalency in same- and different-sex domestic partner benefits and trans-inclusive healthcare.

Correction: An earlier version of this story said that Cracker Barrel’s current HRC CEI rating was 65. As stated above, it is 80.