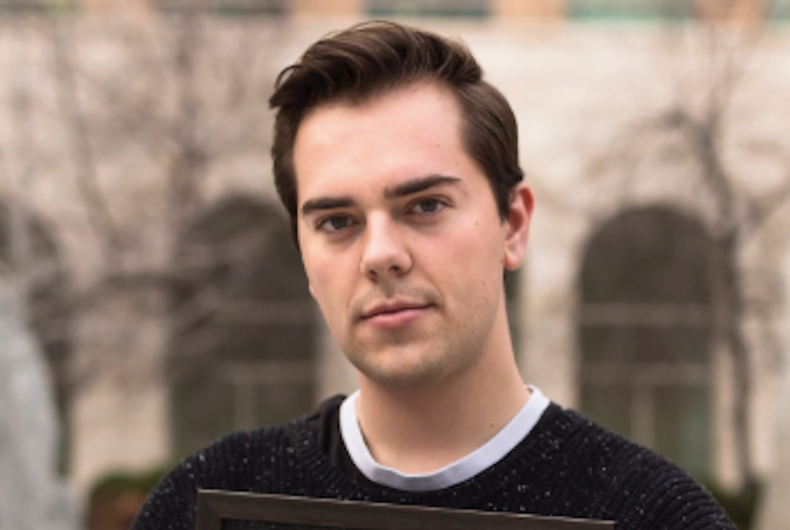 Matty Easton, a political science major who is also the valedictorian at Brigham Young University — an anti-LGBTQ Mormon institution in Provo, Utah — came out yesterday during his graduation speech.

His coming out is all the more noteworthy because BYU is owned by the Mormon church and consistently ranks as one of the most unfriendly campuses for LGBTQ students in the U.S.

During his speech, Easton said:

Congratulations to my siblings of color, my LGBTQ friends…. to all those who constantly have stood in the face of adversity to make our campus better for future generations: You are seen, you are loved…

As I’m sure many of you have felt, I recall countless times here at BY where I have battled and fought in prayer with my maker. It was in these quiet moments of pain and confusion that I felt another triumph: that of coming to terms not with who I thought I should be but who the Lord has made me.

As such, I stand before my family, friends, and graduating class today to say that I am proud to be a gay son of God. I am not broken. I am loved and important in the plan of our great creator. Each of us are.”

He then thanked his family, friends and mentors for supporting him and reminded fellow students, “Your place in this world is important and your story invaluable.”

Here’s his speech below:

In 2007, the BYU Honor Code began allowing LGBT students to openly state their sexual orientation without facing sanctions or expulsion, so long as they avoid physical intimacy with members of the same sex. In 2010, the Honor Code changed again to allow for LGBT advocacy.

In 2014, the school’s bookstore yanked greeting cards acknowledging same-sex marriage from its shelves. In 2016, a student alleged that his roommate attacked and evicted him after he came out. A 2016 study revealed that the school’s policy forbidding gay sex made LGBTQ students fearful of reporting same-sex sexual assaults.

In 2016, the LGBTQ advocacy group Athlete Ally sent a letter to the commissioner of the Big 12 college football organization urging the conference to remove BYU from consideration for membership because of the school’s anti-gay policies.

Related: Brigham Young students reach out to young, gay Mormons: ‘It Gets Better’

I feel so so lucky to have had a chance to share some of my story with so many people…. I am feeling overwhelmed by the reaction to my words today (in the best way possible!) Thank you to all those who have expressed love and support. It means everything ❤️🌈

I am grateful to @byu_fhss for allowing me to share my authentic and vulnerable self to so many in our college.

During my time at BYU, I have slowly come out to my closest family members and friends. However, this is the first time I have publicly declared it. I felt it was important to share both for myself and for the LGBTQ+ community at BYU.

While I don’t speak for everyone—my own experience is all I can vouch for—I hope that people know that we ARE here at BYU, and we’re not going anywhere anytime soon.

I’m also especially grateful for the Poli Sci Dept @BYUPoliticalSci. I can’t even begin to name all the professors and faculty who have loved and supported me academically, mentally, and spiritually. I couldn’t have asked for a better experience. Thank you—you know who you are ❤️