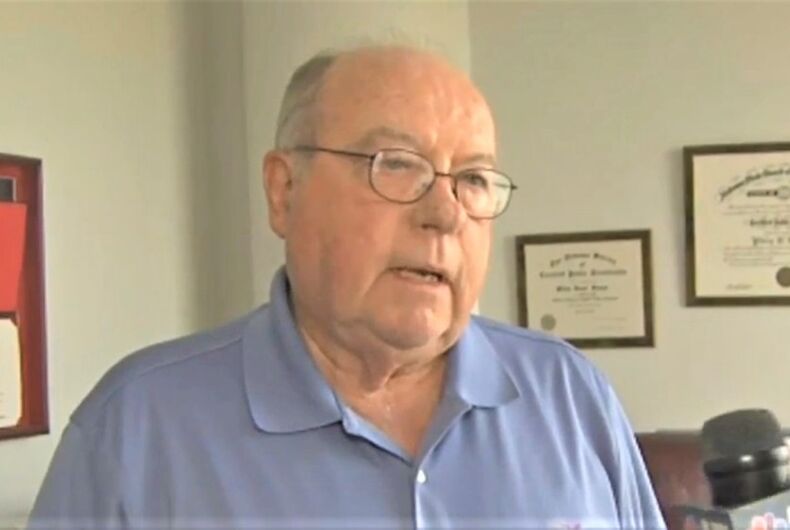 In an inflammatory public Facebook post, Phil Benson — Republican treasurer of Mobile County, Alabama — called the LGBTQ community “freaking queers” and later told the media, “[All] gay people are offensive to me.” He has not apologized for his comments.

Benson left the comment on a county Republican Party Facebook page. It has since been deleted by the page’s moderator.

He made the comment on an article about Jack Phillips, the owner of Denver’s Masterpiece Cakeshop bakery who got involved in a U.S. Supreme Court case after he refused to serve a same-sex couple based on his so-called “religious beliefs.”

In response to the article, Benson wrote, “This poor guy needs to move to a place he is wanted. Freaking queers have gotten too much sympathy. A real abomination.”

Abomination, of course, is a biblical term that conservative Christians often utter in disapproval of LGBTQ people. So it’s hardly surprising that Benson invoked the bible when asked about his comments during an interview with local news outlet WPMI.

Benson reportedly asked his interviewer to read a Bible verse about the towns of Sodom and Gomorrah, two towns that God destroyed for being inhospitable to his angelic messengers.

Afterwards, when the interviewer asked Benson if he realized that his comments were offensive to gay people, Benson responded:

“And gay people are offensive to me. Do you understand that? They can be very offensive. All this beautiful rainbow stuff. When one of our presidents lit the White House with wonderful rainbow colors that offended me… I’m sorry they are offended. Their lifestyle offends me.”

In a subsequent interview with AL.com, Benson said, “It’s not only the gays, the LBG-ABC whatever. All groups have gotten just too strong, too powerful.”

It seems that Benson hasn’t been reprimanded for his comments, but Alabama Republican Chairman Terry Lathan said, “Mr Benson’s comments represent his own personal opinion. I find them to be unnecessary, divisive and reflect solely on himself.”