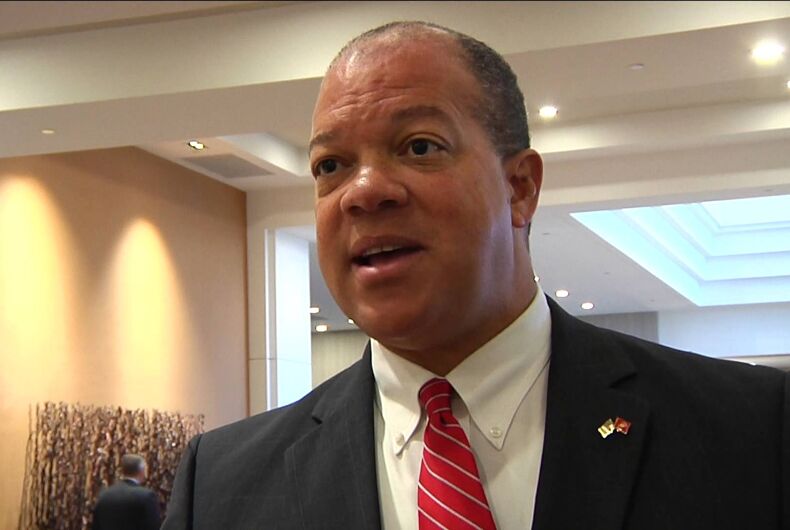 A citizen comments: “In 1 Corinthians, it says that a man who has an affair with another man will be put to death.”

“It says that in the Old Testament, too.”

Another attendee asks, “Can you introduce legislation?”

Chuckles are audible. The state representative joins the laughter. “I wonder how that would go over?” Hill says.

It’s unsurprising that Hill would find such a suggestion worthy of laughter. In the past, he has said that God is judging the nation because of the “homosexual movement,” he says that Pride parades “promote the gay agenda” and he once suggested, “Let’s replace LGBTQ with a ‘?’ That covers the whole thing.”

In a subsequent series of tweets, Hill tried to defend himself, writing:

Fake news, Carlos! And you know it. I never said I wanted to kill anyone! Instead, I am being attacked because I have made a strong stand to protect the preborn in the womb. You should focus on doing your job better instead of every word that proceeds out of my mouth. #Obsession.

[I said I didn’t recall laughing or the comment] before I heard the audio. This event happened a week ago Thursday. I laughed at the nonsense of running legislation that the gentleman in the audience suggested. And you know it. Don’t join the #FakeNewsMedia

If you listened to the audio and still come to that conclusion [that I support killing gay people], then you really are a partisan hack.

[My resignation] ain’t gonna happen! Your attacks are because I don’t back down from strong conservative values including protecting the preborn!

Pride in Pictures: The year after Stonewall, parades started happening across the nation