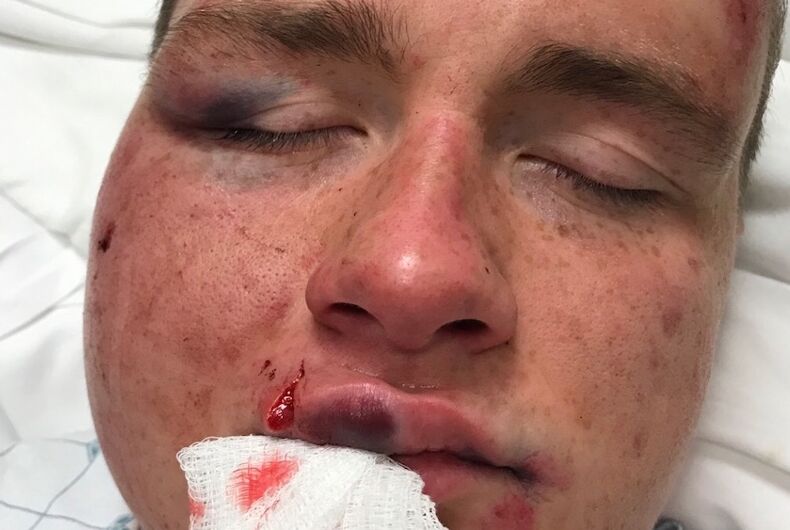 Braden Brecht had a blackened right eye, a swollen right cheek, a torn and bruised lip and blood on his face following the June 16 gay bashing.Photo: Carl Craven

A 19-year-old and two younger teens have been arrested and charged with a hate crime in connection to the brutal gay bashing of 21-year-old Washington D.C. resident Braden Brecht which occurred on June 16 during Sunday’s early morning hours. However, according to the victim’s boyfriend, more of Brecht’s attackers remain free.

Brecht’s boyfriend Carl Craven described the attack via a GoFundMe campaign that he set up to assist Brecht with his post-attack medical expenses:

[We were walking] from Hawthorne’s to Nellie’s on U St [a rooftop bar and a gay bar in D.C.] last night and we stopped to talk for a few minutes. He was leaning against me and a few guys started yelling ‘f*ggot’ at him and started to swing at him.

It was all a quick blur but next thing you know there was literally a mob of 15 guys beating him. They came out of nowhere and I was powerless to stop them, all I could do was jump on him to try protect him and scream help. I don’t remember how long they kept beating him for.

They stole his phone and my wallet. They chipped a major part of his front tooth and he had to get multiple stitches on his lip.

The three arrested teens have been charged with robbery by force and violence. Prosecutors will use the anti-gay slur they uttered before the attack as proof of their anti-gay prejudice, and hence proof of a hate crime.

The $10,000 GoFundMe campaign has already raised $13,150. Brecht moved to D.C. with Craven barely a month ago and has no health insurance. The couple are unsure whether they plan on staying in D.C. any longer.

The Washington Blade reports that at least four gay men have been attacked in D.C. during 2018 — two of the victims were hospitalized after their attacks. Two trans women of color have also been murdered near the D.C. border this year.

A summer camp fired his son for being gay. Now dad is leading a parent rebellion.

Being able to use your chosen name on your credit card? Priceless.