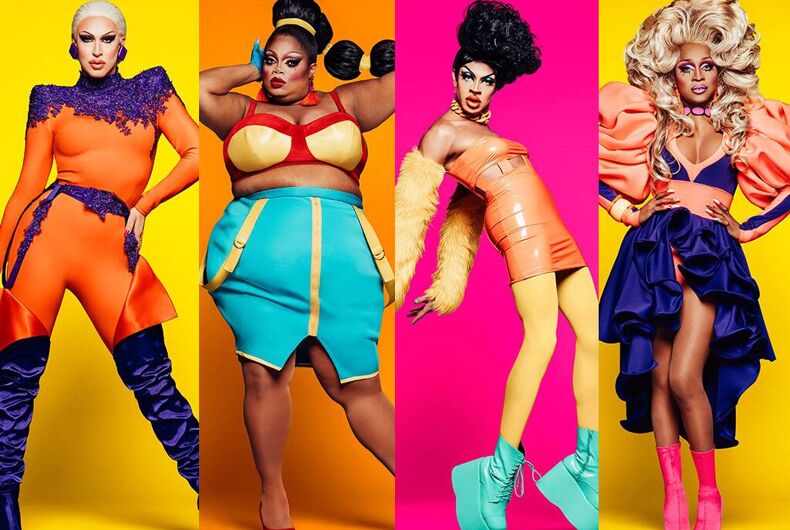 It’s no secret that fans of RuPaul’s Drag Race expect reveal after reveal in the season finale, and yesterday’s season 11 finale did not let people down.

Since season 9, the final four queens have faced off tournament-style in a lipsync battle royale. And the winners always do a little something more than just moving their lips and dancing on stage.

Sasha Velour, season 9’s winner, set the tone with her iconic glove-and-wig reveal that left her showered in flower petals.

The season 10 queens got the message: have a gimmick. Asia O’Hara’s was a spectacular failure; she opened her breasts to reveal what looked like half-dead butterflies (she insisted that they were just a little sleepy but were fine later).

Aquaria appeared on stage in an aluminum foil garbage bag that was obviously going to reveal to something more appropriate for a lipsync.

So the expectations were set for RPDR contestants and fans going into the season 11 finale last night.

Brooke Lynn Hytes and Yvie Oddly faced off in the final lipsync. Brooke Lynn walked on stage in an oversized black dress with the word “REVEAL” printed over it in block letters, a nod to how a lot of reveals can be spotted from a mile away.

And she took off that outfit to show a shiny catsuit was spectacular in its own right.

But her self-aware reveal was outshined by Yvie Oddly’s meta-reveal. Yvie appeared on stage in a giant dress, the kind that looks like it would fit over something like a bodysuit, and… she kept it on.

Her reveal, in other words, was that there was no dress reveal. Instead, she turned her head around to reveal another head painted on the back of her headpiece.

I have no words. Yvie Oddly has shaken & gooped me to the core, brought tears to my eyes, and invigorated my excitement about the future of this art form on mainstream TV.

She is royalty with or without that crown. #DragRace #DragRaceFinale pic.twitter.com/TaOFd18UvC

Today @RuPaulsDragRace reminded us that great drag is whatever you want it to be. @OddlyYvie, you gagged me. Congratulations! 👑 pic.twitter.com/O9gVgArwFO

This Oddball snatched the crown, and broke the internet 👑🤯✨@OddlyYvie pic.twitter.com/vwUhcYCR7s