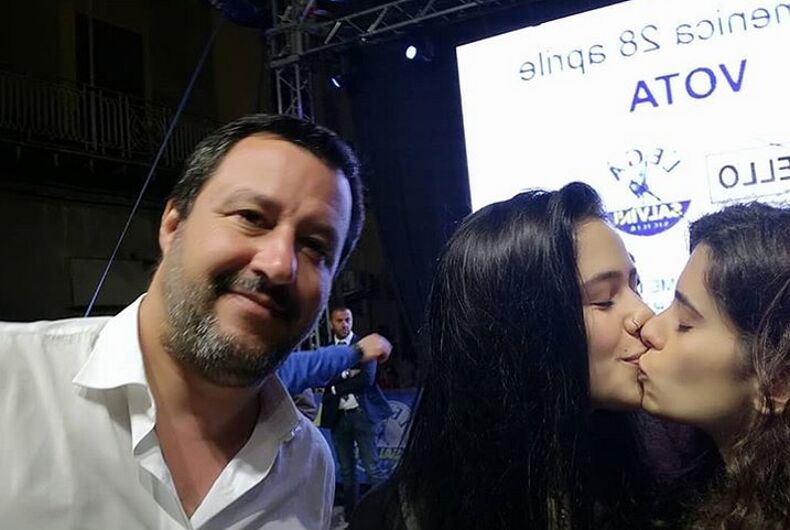 Two women photo-bombed an anti-LGBTQ politician with a kiss.

Italy’s Interior Minister Matteo Salvini is a member of the far-right League Party. Earlier this year he gave the keynote address as the World Congress of Families, a conference to “defend the natural family” where speakers said that marriage equality will “wipe out our community and our traditions” and supported conversion therapy.

So when Gaia Parisi and Matilde Rizzo, both 19, saw that Salvini was visiting their hometown of Caltanissetta, Sicily, they knew they had to do something.

Salvani was doing pictures with supporters and the women waited in line for a picture. At the moment the picture was taken, they turned to each other and kissed.

They told CNN that security pulled them apart. Salvani wished them well, said he hoped they “have sons,” and patted Rizzo on the head.

Related: This gay ‘kiss’ commercial has homophobes frothing at the mouth

Parisi posted the picture to Instagram, which went viral.

“We decided to use all the means at our disposal to protest peacefully, to be able to send our message through the platforms that unfortunately, today, seems to be the main platforms by which our ministers communicate with citizens,” she said.

After it got popular, Salvani posted his own version of the picture with the message, “Greetings, peace and good, sisters.”

Parisi said that she wanted to deliver “a message of love and tolerance against the language and the attitude of hatred that politicians like Matteo Salvini keep spreading.”

“Even a simple and natural act like a kiss can open a political debate.”