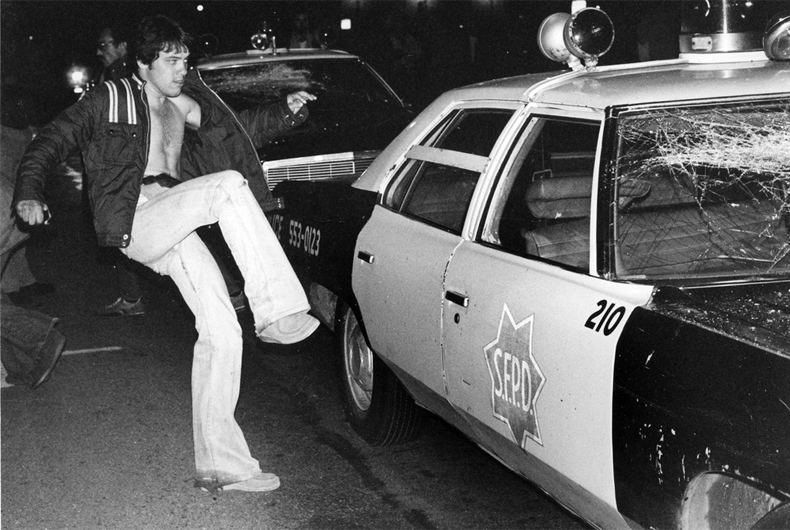 A protestor kicks a police car during the White Night Riots in San Francisco on May 21, 1979.Photo: Public domain

White was convicted six months later, not of first degree murder, but of voluntary manslaughter. He received a sentence of seven years and eight months in prison. His lawyers argued that Whites’ mental state had been impaired due to depression and excessive fast food consumption.

The trial of Dan White, and the protests that happened afterwards would later be recognized as the White Night Riots; specific events in history that symbolized the prevalence of inequality and intolerance in the American society.

Milk was the first openly gay person to be elected into public office in California. He was a prominent figure in the queer community, and more importantly, the whole city.

After the verdict broke on May 21, 1979, the public organized a peaceful march in San Francisco’s predominantly gay Castro District. What started as 500 people grew to a crowd of approximately 5,000.

When the police showed up, the crowd grew increasingly angry. The police had raised over $100,000 for White’s defence, as he was a former police officer.

The crowd marched to City Hall. The officers, who were ordered to hold the crowd back, began attacking marchers with night sticks. When protestors destroyed several police cars and parts of City Hall, officers used tear gas to stop the riot, and the crowd dispersed. The officers’ badges were taped over, so their names could not be read.

Later that night, the police took to Castro street, raiding a gay bar and attacking people on the streets, many of whom had participated in the march. Fifty-nine police officers and 124 protestors were injured. Two dozen people were arrested.

Ten years after the Stonewall riots in 1969, police were still raiding gay bars, using unnecessary force to control peaceful protests, and protecting their own. White got away with double murder.

Forty years later, not much has changed.

Police have, historically, not been helpful in the resolution of these issues. Police violence is still one of the biggest issues in America – particularly surrounding people of color.

Continued police brutality and systemic mistreatment of the queer community has lead the police to be banned from pride parades for several years.

According to a study by Jama Network Open in 2018, men, people of colour, and those identifying as homosexual or transgender have an increased likelihood of being exposed to police violence.

Of 1000 respondents, there were six individuals who identified as transgender. All six reported to have been victimized by police. This suggests an increased vulnerability for this population to police violence, according to the study.

An article by MJ Eckhouse and Saxen MJ in 2017 suggests that these statistics make transgender individuals “uncomfortable seeking police assistance”.

With the unwavering oppression and violence, where will America be in another 40 years?

A third black transgender woman was murdered this week