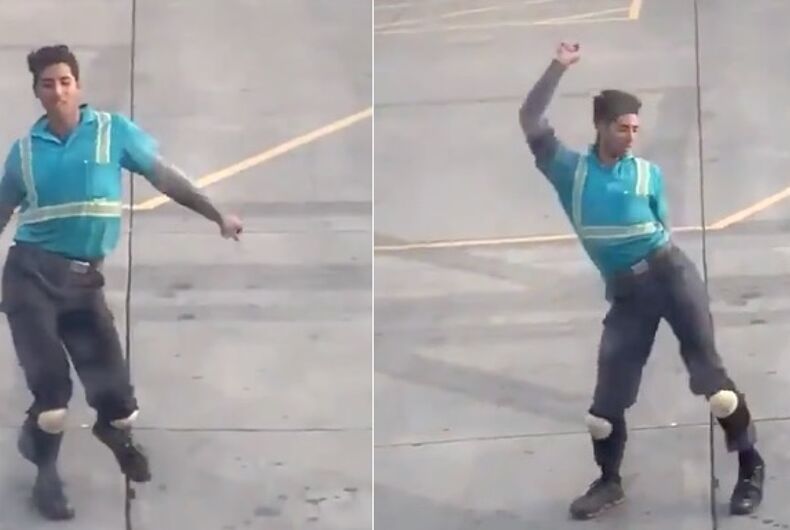 23-year-old Luu Vailuu is a baggage handler for Hawaiian Airlines and he’s gone viral for his dance moves – on the tarmac.

While Vailuu stores suitcases and directs planes to their gate, he’s been known to strut his stuff and shimmy down the runway to the delight of incoming travelers. Video of Vailuu’s dance moves have already made the rounds online, but a recent walk down the runway has social media going gaga.

“Every time I do something I always see a phone sticking out,” Vailuu told BuzzFeed News.

But Tiffany Gataniss’s video was the one who gave him viral fame. Vailuu noticed Gataniss filming as he strutted his stuff up to the plane, gave her a wave, and started a performance that had the whole plane screaming “YAAAAASSSS”

Another passenger also captured the show on video and uploaded it as well, garnering even more reactions from newfound fans.

“I had just finished loading the plane and it was my last plane before I got off,” Vailuu told BuzzFeed. “I was like, I might as well!”

A QUEEN WENT OFF!!😂😂 pic.twitter.com/saxgr5jIyL

Video from earlier this year had everyone declaring, “This guy needs a raise ASAP.” Agreed.

This guy needs a raise ASAP. Best arrival ever pic.twitter.com/etCDAYqI5B

He wanted to marry his partner in his childhood church, but the congregation wouldn’t allow it