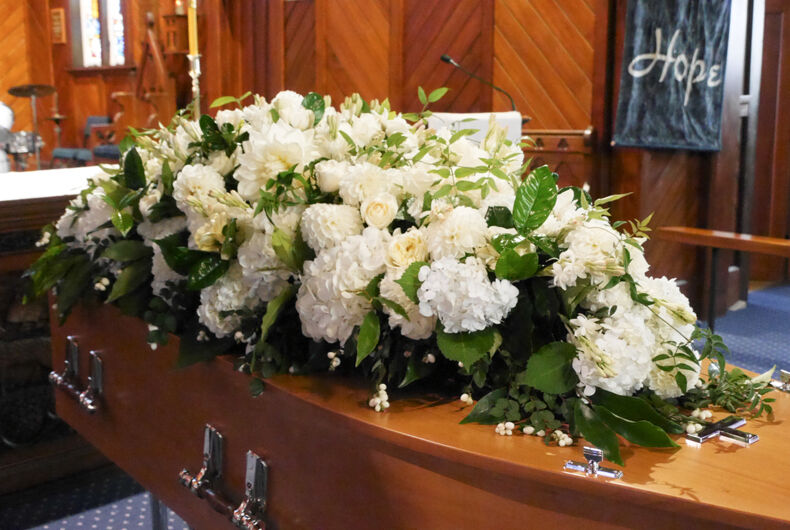 In a suburb just outside of Dallas, a transgender mural is being painted on the side of a tattoo and piercing shop. The mural commemorates the 50th anniversary of Stonewall, displaying an image of our foresisters Marsha P. Johnson and Sylvia Rivera. They are the catalysts of our 1969-to-present day LGBTQ movement. Their images are against the backdrop of the colors of the transgender pride flag.

Brian Kenny, the muralist behind the painting, explained, “This mural represents the trans women of color who were key figures in that riot and also key figures in the start of the queer liberation movement. This mural is to honor them and to give more visibility, love, and attention to the transgender community. I wanted this mural to be a positive reinforcement that we are all a human family. We have a lot more in common than our differences. I’m hoping the mural can be a bridge.”

For the 50th anniversary of Stonewall I hope more images of Johnson and Rivera will be on display. I hope as they will be honored in LGBTQ communities across the country this Pride season and Americans learn of the difficult day-to-day struggle it took them to stay alive. I hope we all will do more to stem the violence faced by our transgender community – especially our black and Latinx sisters of color.

In one week this May, three transgender women of African descent were murdered – Michelle Washington, 40, Claire Legato, 21, and Muhlaysia Booker, 23. As I draw attention to these sisters, several others have been murdered have also been killed this year, and, sadly, many more will be murdered after.

Related: I founded Trans Day of Remembrance 20 years ago. Here’s why.

Washington was found dead with gunshot wounds to her head, body, and buttocks.

Legato was shot in the head after an argument erupted between her mother and the shooter. Her community in Cleveland took to social media to express their grief and outrage.

Booker was found shot dead on a quiet street in Dallas. In April, Booker was beaten by a crowd that shouted “ That’s what your faggot ass gets,” “Get that faggot out of our hood,” and “Shoot that punk ass.” The mob scene was caught on cell phone footage that went viral on social media.

Texas’s black trans female community has been subject to a steady stream of assaults since gentrification evicted them out of city’s once LGBTQ neighborhood. Like Booker, they congregate on a strip on the outskirts of town, and many engage in transactional sex work to survive.

Texas’s hate crime laws include sexual orientation but not gender identity, which makes Kenny’s mural a protest statement, and an act of healing.

Rita Hester, 34, an African American trans woman from Allston, Massachusetts. was found dead inside her first-floor apartment with multiple stab wounds to her chest in 1998. Her death kicked off the “Remembering Our Dead” web project and was the catalyst for what’s now our annual Trans Day of Remembrance.

When Hester’s mother came up to the microphone during the Speak Out portion of the vigil at the Model Cafe where Rita was known, she repeatedly said in a heartbroken voice that brought most of us to tears, “I would have gladly died for you, Rita. I would have taken the stabs and told you to run. I loved you!”

As the vigil processed from the Model Cafe to where Rita lived and died, Hester’s mother again brought me to tears as she and her surviving children kneeled in front of the doorway of Rita’s apartment building and recited the Lord’s Prayer. Many of us joined in unison.

In a report titled “Violence Against the Transgender Community in 2018” the Human Rights Campaign highlights what ties all of these murders – throughout the years – together.

“While the details of these cases differ, it is clear that fatal violence disproportionately affects transgender women of color, and that the intersections of racism, sexism, homophobia, and transphobia conspire to deprive them of employment, housing, healthcare and other necessities, barriers that make them vulnerable.”

During the “Trans Catholic Voices” breakout season at the DignityUSA conference in Boston in 2017, I heard the vulnerability of an African-American transwoman who pointed out that Pope Francis’ statements about trans people deny them of basic human dignity and perpetuates violence against them.

In her closing remarks,  she asked for help from advocates and allies in the room in words that brought me to tears.

We are those other people. It’s time we realized that.

Pride in Pictures: LA Pride is one of the oldest in the nation