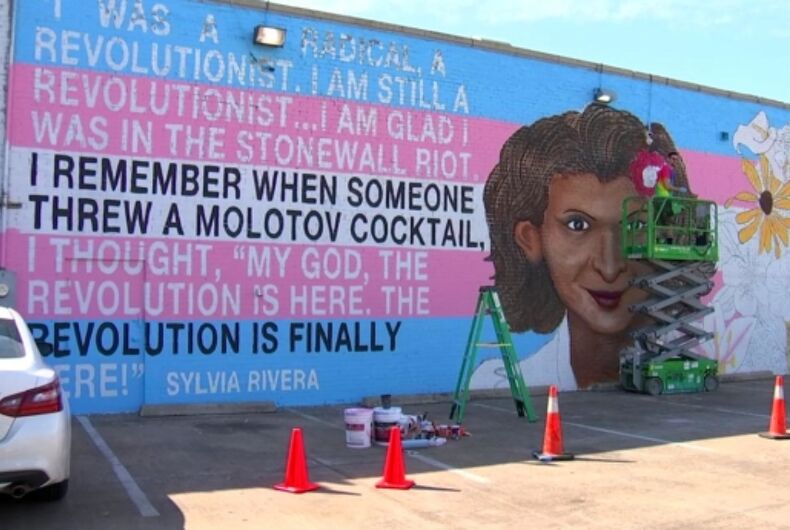 A new mural depicting the transgender pride flag along with portraits of Marsha P. Johnson and Sylvia Rivera is taking shape in a Dallas suburb.Photo: screenshot

A new mural depicting the transgender pride flag along with portraits of Marsha P. Johnson and Sylvia Rivera is taking shape in a Dallas suburb. The mural marks the 50th anniversary of the Stonewall riots, and is believed to be the largest transgender-specific mural in America.

The mural, painted on the side of a tattoo and piercing shop on Cedar Springs Road, is the brainchild of artist Brian Kenny.

“I wanted this mural to be a positive reinforcement that we are all a human family, we are all in this together and really it’s all about love,” said Kenny to KXAS-TV. “We have a lot more in common than our differences. I’m hoping the mural can be a bridge.”

It depicts the two Stonewall icons in front of a transgender pride flag, and highlights two quotes from the pair.

“This mural represents the trans women of color who were key figures in that riot and also key figures in start of the queer liberation movement,” said Kenny explained. “This mural is to honor them and to give more visibility, love and attention to the transgender community.”

The Stonewall riots are seen as the start of the modern LGBTQ rights movement. Marsha P. Johnson and Sylvia Rivera were both a part of the rebellion, with Johnson credited by some for throwing the first brick in the several nights of rioting.

“I had Marsha looking up and next to her is a very famous quote of hers — ‘pay it no mind,'” said Kenny. “Because she was always above it all. She never let anything get to her. She was accepting of everybody.”

Added Kenny, “I had Sylvia Rivera looking right at the viewer because she was the one who was always in your face — screaming into the microphone for gay rights.”

The mural is but one of many projects planned by Dallas-based organization Artitude, who are seeking to enhance the LGBTQ community neighborhoods in and around the Dallas-Ft. Worth area.

“People are moving away from this area and so we are trying to bring back the community here and I think having things like this whether it’s performances or mural art it’s such an important thing,” said Artitude’s co-founder, Rafiq Salleh-Flowers.

The organization has worked with both the Cedar Springs Merchant Association and the City of Dallas office of Cultural Affairs, and is planning additional murals and other projects.