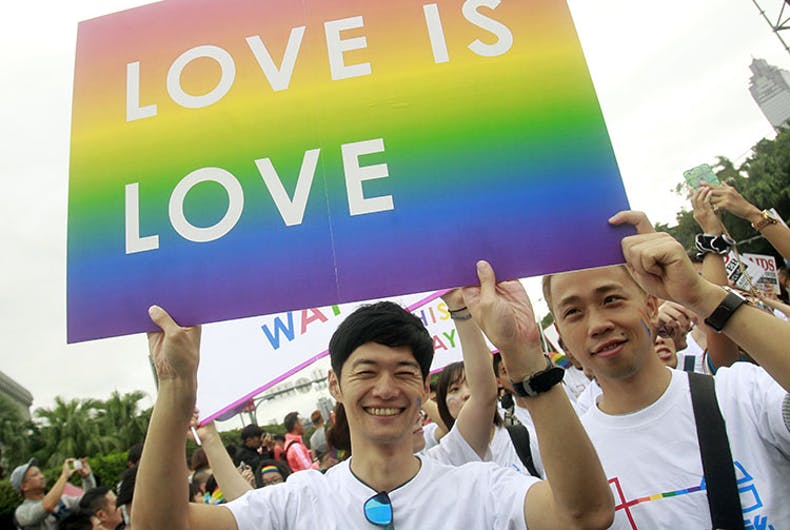 On May 24, 2017, Taiwan’s supreme court ruled that the country’s ban on same-sex marriage violated two parts of the constitution that protect basic human rights.

The court gave the government two years to amend or overturn the law to be in compliance with the ruling.

Now the legislature, faced with the deadline, passed legislation to allow marriages between same-sex couples.

President Tsai Ing-wen has said in the past that she supports marriage equality and she celebrated the passage of the bill.

“On May 17th, 2019 in #Taiwan, #LoveWon. We took a big step towards true equality, and made Taiwan a better country,” Tsai tweeted.

On May 17th, 2019 in #Taiwan, #LoveWon. We took a big step towards true equality, and made Taiwan a better country. 🏳️‍🌈

The bill lagged for years as conservatives opposed it, and a national referendum showed that over 70% of Taiwanese people were against marriage equality.

Anti-LGBTQ groups spend over $30 million to stop marriage equality and even American organizations like the National Organization for Marriage (NOM) and MassResistance helped the effort.

Ultimately, the bill succeeded because it had to. If the legislature didn’t pass a bill allowing marriage between two people of the same sex by May 24, then the court system would automatically begin to recognize those marriages.

The bill, written by the Executive Yuan, or cabinet, isn’t without its flaws. It limits adoption rights for same-sex couples.

“The Executive Yuan’s version is already what we see as the ‘compromise bill’ and there must be no more compromises,” said Jennifer Lu, chief coordinator of Marriage Equality Coalition Taiwan, told the Central News Agency.