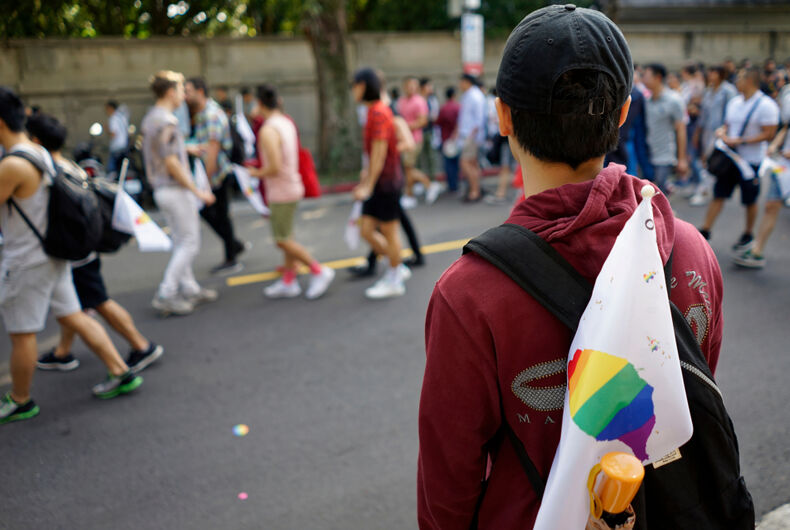 Though the referendums are officially non-binding, they’re likely to affect lawmakers’ decisions heading into the 2019 elections. Regardless, the country must comply with its 2017 Constitutional Court’s ruling legalizing some form of same-sex marriage by May 24, 2019.

Voters had five LGBTQ referendums on the ballot. Here’s what they said (and their electoral results so far).

– Case No. 10: “Do you agree that marriage defined in The Civil Code should be restricted to the union between one man and one woman?” (70.12% voted yes.)

– Case No. 11: “Do you agree that the Ministry of Education should not implement the Enforcement Rules for Gender Equity Education Act (a 2004 law which requires LGBTQ-inclusive education) in elementary and middle schools? (64% voted yes, according to Into More.)

– Case No. 12: “Do you agree to the protection of the rights of same-sex couples in co-habitation on a permanent basis in ways other than changing of the Civil Code?” (57.60% voted yes.)

The vote’s final results are expected November 25 at 2 a.m. Legislators will have 90 days to respond, but it’s possible they’ll do nothing (just as they’ve done since the 2017 court ruling).

In a statement issued after Taiwan’s vote, Evan Wolfson — the founder of Freedom to Marry, the organization which helped win marriage equality in the U.S. — wrote:

“Tonight, we send our support to advocates and families in Taiwan who are hurting after a disappointing election result. Over the last year, anti-LGBT organizations … spent millions on scare tactics and deceit, in an effort to spread lies about gay and lesbian people and harm families.”

He continued, “While the results of the referenda are not what we hoped for, it is clear that the movement for marriage in Taiwan will not be deterred…. A healthy democracy requires more than merely subjecting the rights of a minority to the whim of a public vote. … We stand with local advocates as they renew their call for elected leaders to uphold the important safeguard function that courts play, and respect the constitutional rights of all Taiwanese people, including the freedom to marry.”

His statement concluded, “In the 25 countries around the world where same-sex couples have the freedom to marry, people have seen that families are helped and no one is hurt … Every day of denial is a day of real injury, indignity, and injustice, it is time to fulfill the command of the Constitution and end exclusion from marriage without further delay.

Surprisingly, Thailand might actually emerge as the first Asian country to legalize same-sex unions. Thai legislators are considering a controversial civil unions bill that would leave LGBTQ couples without full marriage equality rights, including the rights to “adoption, joint welfare benefits, taxation or medical consent where a partner is incapacitated.”

These 24 LGBTQ-owned businesses are perfect for holiday gift shopping

Trump supporters are thrilled they have fewer friends this holiday