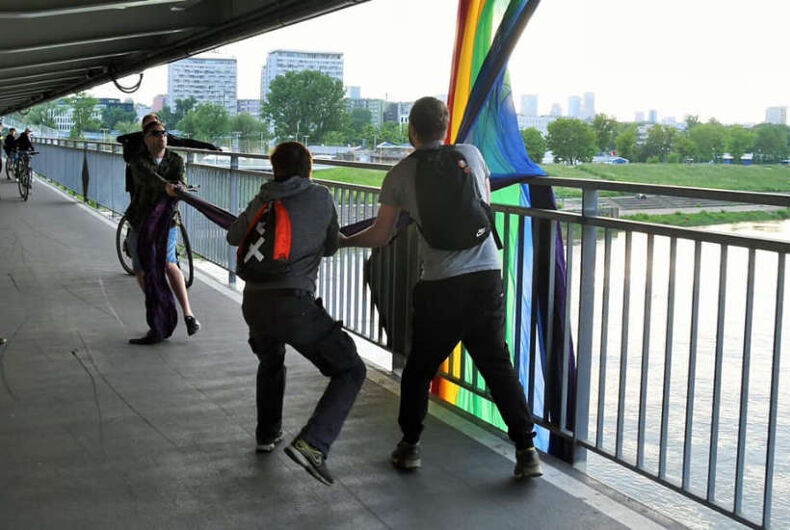 Warsaw thugs descended on a memorial service for a transgender woman who committed suicide.Photo: Screenshot

Vicious thugs descended on a memorial service for a Polish transgender person who died of suicide, ripping apart a pride flag and attacking mourners.

“I’m fed up,” Milo Mazurkiewicz wrote in a Facebook post shortly before ending their own life. “I’m fed up being treated like a piece of shit.”

But when mourners gathered on the bridge where Mazurkiewicz died to hang a giant pride flag and remember her life, two groups of men attacked the group and ripped apart the flag.

A drone was shooting footage nearby when the operator noticed the commotion on the bridge. You can see a man run up to the group on the bicycle path running beneath the bridge and try to tear down the flag. As the group scuffles over the flag, the man rips off the purple stripe before kicking and punching mourners.

Activist Bartosz Staszewski says a separate group was attacked the bereaved friends gathered on the upper level as well.

“Those two groups were very different groups,” Staszewski told Gay Star News. “It just shows that in one hour, we were attacked by two different groups of homophobic people, who were not afraid to approach us.”

Staszewski said that the victims called the authorities as the attack was happening, but police took almost an hour to arrive. Two of the thugs from the upper portion of the bridge have been arrested, but no one from the bike path attack has been apprehended.

EN follow/Chcieliśmy oddać hołd Milo, która 6 maja skoczyła z mostu Łazienkowskiego – z bezsilności i transfobii. Nie minęło 15 minut od rozwieszenia flagi a zostaliśmy dwa razy zaatakowani. Na filmie zarejestrowany jest cały pierwszy atak (dwóch mężczyzn na dole, jeden na górze). Kilka osób pobito – co widać na tym nagraniu. Powtarzam – DWA RAZY zanim przyjechała policja zostaliśmy: POBICI i ZWYZYWANI w centrum Warszawy a flaga została zniszczona. Kiedy to się skończy? Podajcie dalej, nagłośniajmy takie sytuacjeA group of LGBT+ people and allies were holding a vigil for Milo Mazurkiewicz, a transgender girl who died earlier this month, on the Łazienkowski bridge in Warsaw, Poland. Mazurkiewicz, who was non-binary and suffered from transphobia, committed suicide by jumping off that bridge. 13 minutes in, the peaceful gathering, divided on two levels of the bridge, was attacked by a man who started to pull the 20-metre flag hanging from the side of the bridge. He hit a photographer and some cyclists who were just passing by. Then he started to tear the flag. “The attackers ripped apart the flag, tearing the purple piece I was holding with Ania”, says Wojtek Levicki, one of the organizers. “Violet in the flag symbolizes spirituality-spirit. We showed them that they would not break our spirit”.