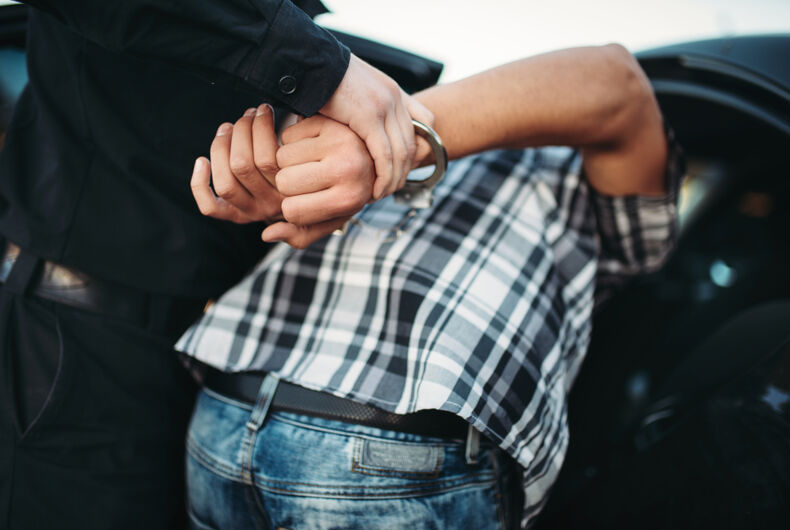 Gustavo Alvarez — a gay man living in Palo Alto, California — has reportedly filed a lawsuit against local police after they allegedly “kicked down his front door, beat him until he bled and arrested him without probable cause because he is gay,” reports The Mercury News.

The lawsuit alleges that Palo Alto police Officer Christopher Conde approached Alvarez in the driveway of his mobile home on Feb. 17, 2018 under suspicion that Alvarez had been driving with a suspended license earlier in the day.

Alvarez informed the officer that there was no way he could confirm that he was behind the wheel, and then entered his mobile home, leaving Officer Conde outside. Conde then called four backup officers, stating he wanted to arrest Alvarez for “driving with a suspended license and resisting an officer.”

Related: A black bisexual man was killed by police in his kitchen because he had a bread knife

Alvarez’s lawsuit then claims that the officers yelled at him to come outside, pointed a pistol at his front door and kicked it down, “ripped Alvarez out of his home, slammed him onto the hood of his vehicle and repeatedly threatened and assaulted him, knocking one of his teeth loose and causing him to bleed from his mouth,” handcuffed him face down on a car hood, taunted, mocked and humiliated Alvarez because of his sexual orientation, saying things like, “So you think you’re a tough guy, huh?” and “You’re gonna be bleeding a whole lot more.”

Though he was initially booked into jail on charges of driving under the influence, driving with a suspended license and resisting an officer, all charges were later dropped due to a lack of evidence. Alvarez claims the entire encounter was captured on his home surveillance cameras and says that the officers used unjustified force and searched his place without a warrant.

Alvarez claimed he installed the cameras after “prior, repeated, and ongoing harassment” by the police. It’s unclear if the four officers involved — Christopher Conde, Thomas Alan Destefano Jr., Matthew Hubbard, Ian Johnson and Wayne Benitez — still work for the department.

This is “at least the third time in recent years that the Palo Alto Police Department has been accused of excessive force,” according to The Mercury News.