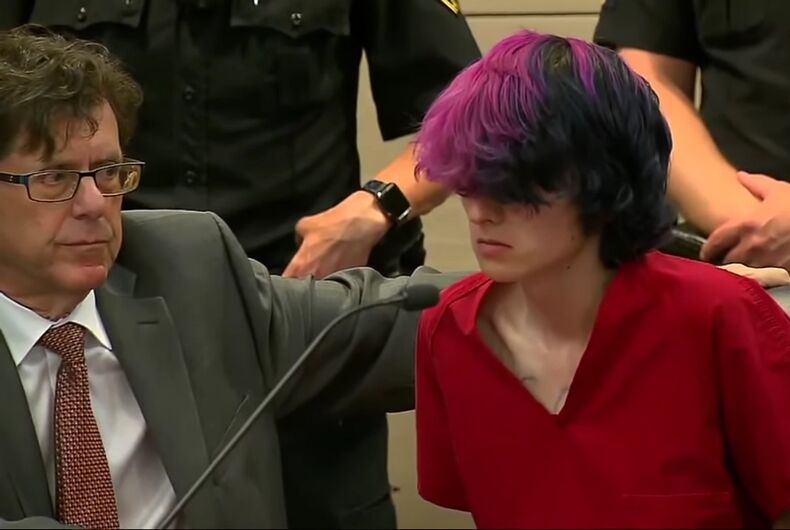 Devon Erickson in court with his lawyerPhoto: YouTube/The Denver Post

Local media is reporting that one of the suspects in the STEM School Highlands Ranch shooting in Colorado is transgender.

On Tuesday, two students at the STEM School opened fire on their classmates, killing one and injuring eight others before they were stopped.

Both of the shooters were taken alive by police and appeared in court yesterday. Devon Erickson, 18, was one of the shooters. The senior has a purple streak in his hair and, according to The Advocate, had a selfie with a rainbow overlay to celebrate pride in his Facebook account.

The other, Alec McKinney, is 16. While police and court records deadnamed him, his public defender said that he goes by Alec and uses “he” pronouns.

Prosecutors have not said whether McKinney would be tried as an adult. He faces charges of suspicion of murder and attempted murder.

A source close to the investigation told KMGH-TV that the shooters’ motivations went “beyond bullying” and “involved revenge and anger towards others at the school.” One of the suspects was known to be taking illegal drugs, but the source did not specify which.

Erickson’s best friend Aiden Beatty told The Denver Post that Erickson enjoyed musical theater and had just gotten a job as a vocal instructor. He said that his friend wasn’t bullied all that much at the school.

“He would say so-and-so doesn’t like me,” Beatty said, but he said that Erickson didn’t mention anything more serious.

A car that was spray-painted “Fuck society” was towed from Erickson’s home.

“F—k society,” read a message spray painted across a vehicle that investigators have towed from one of the suspect’s home https://t.co/NDWoNJlVxY pic.twitter.com/VYvHo5JRN4

Local authorities say that Kendrick Castillo, 18, was shot and killed during the shooting while he was trying to save other students.

Student Nui Giasolli said that she was in a British literature class when one of the shooters entered. Castillo lunged at him, giving the other students time to hide or escape the room.

“To find he went down as a hero, I’m not surprised, that’s exactly who Kendrick was,” said Rachel Short, Castillo’s employer.

A generic version of PrEP will be available next year