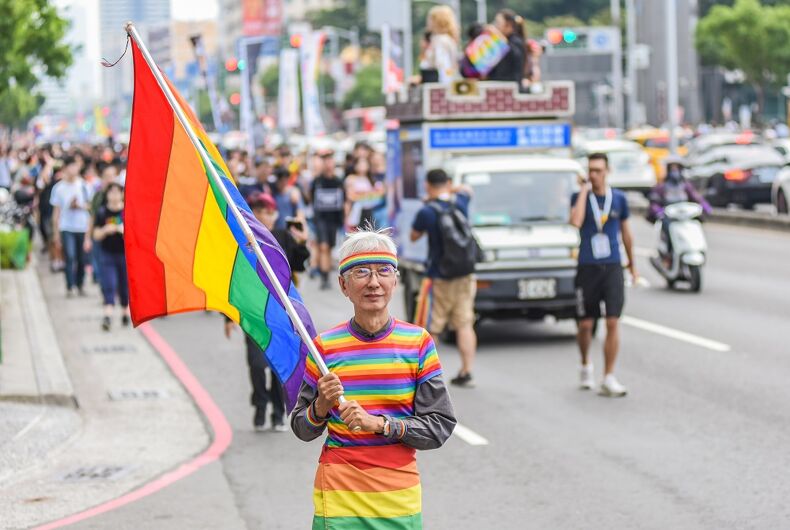 One of the first couples to get married was Shane Lin and Yuan Shan-Ming in Taipei.

"History in Taiwan. Same sex marriage is now legal. Shane Lin and Yuan Shan-Ming become one of the first couples to marry this morning in Taipei."

Taiwan is the first country in Asia to legalize same-sex marriage, and the first official weddings are underway 🏳️‍🌈 pic.twitter.com/EwiidQV48l

The couple’s marriage was officiated by Taiwanese LGBTQ activist Chi Chia-wei, who wore a red coat and a rainbow headband and used the pen that President Tsai Ing-wen used to sign the marriage equality law earlier this week.

🌈👬 Taiwan's having its first official same-sex weddings after becoming the 1st in Asia to legalize same-sex marriage.

Chun-peng Chou and Meng-huan Lin were also among the first to get married.

Amber Wang and Kristin Huang’s marriage was profiled by CNN.

👩‍❤️‍💋‍👩🏳️‍🌈👨‍❤️‍💋‍👨 In sickness and in health, Kristina Huang recounts when her partner was rushed to the hospital to explain why same-sex marriage matters in Taiwan #婚姻平權 #LGBTQ pic.twitter.com/ZQusE6Yvag

Three couples – one lesbian, one straight, and one gay – got married at the same time to celebrate marriage equality being passed.

And even people who aren’t getting married are celebrating the day.

"We took a big step towards true equality, and made Taiwan a better country.”