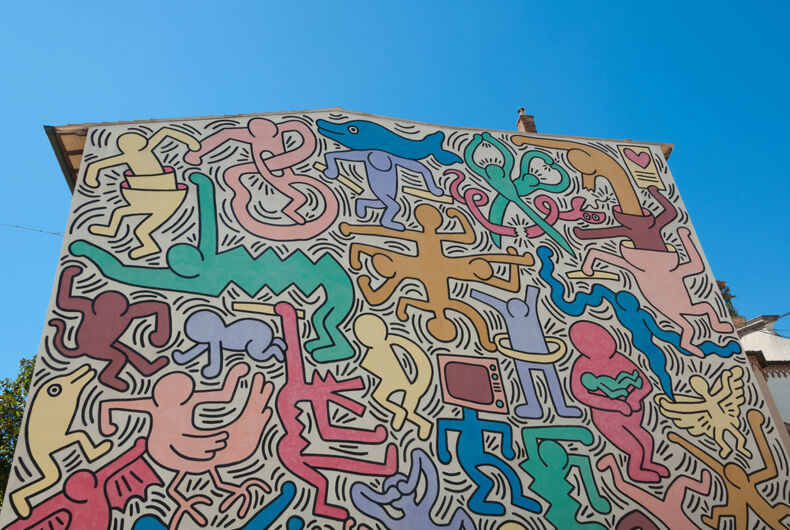 The Pisa's Mural (1989) by Keith Haring on the south wall of the Church of St AnthonyPhoto: Shutterstock

A Catholic church in New Jersey has demanded that a public charter school cover up a Keith Haring-inspired mural because it is “obscene.” The school rents the property from the church.

The murals, created by students at the Bergen Arts and Science Charter School, were inspired by famous artists and displayed in the cafeteria. A high school junior’s mural that depicted his trademark style of graffiti art, however, didn’t sit well with the landlords.

“So…my school’s owned by a Catholic Church and they want me to take down my Keith Haring mural that supports the LGBT community,” the student tweeted. “They think it’s inappropriate and wrong for a school setting. I’m heartbroken and I really never thought this could actually happen. Please help.”

“This school is infringing on my rights just as much as the church now,” she wrote. “A public school is complicit in discrimination.”

She did not want her name published, according to the New Jersey Record. They described the offending portion of the mural as “abstract figures with interlocking circle and arrow symbols that represent the male gender.”

Rev. Paul Prevosto, pastor of Holy Trinity Church in Hackensack, told the paper the “obscene” artwork was spotted by a parishioner. The church shares some common spaces with the school – including the cafeteria.

“It was offensive,” Prevosto said. He added that he asked the school “to take care of it.” He cited the school’s lease, saying anything “that would be contrary to our Catholic sensitivity should not be displayed or seen.”

While the school is public, it leases the premises from the Catholic church and the lease agreement stipulates “due to the Catholic nature of the Landlord, Tenant promises to conduct no affairs or establish any organizations that would be contrary to its Catholic moral values, ethics and faith.”

New Jersey law requires LGBTQ history be taught in public schools, something the church has actively opposed. But as state governments have shifted responsibility for teaching our children from public institutions to “charter school” private companies, more and more scenarios like this will arise. Many of the schools are religious in nature or housed in properties owned by churches.

“As a public school, we are inclusive, supportive, and respectful of the artistic expression of our students, and likewise are respectful of the directives of the church as a private entity and owners of the property,” iLearn, the company who owns the school, told the paper.

But, in the end, they covered up the mural. Support for queer students only goes so far when the antigay landlord comes knocking apparently.

Haring is considered one of the geniuses of late 20th century American art. His socially conscious graffiti-style was popular in the 1980s. An out gay man, Haring was an outspoken AIDS activist, incorporating both topics into his work.

Haring died of complications from AIDS in 1990. His work is exhibited in major museums worldwide – and inside churches. One of his most famous pieces is “The Pisa’s Mural (1989)” on the south wall of the Catholic Church of St Anthony in Pisa, Italy.