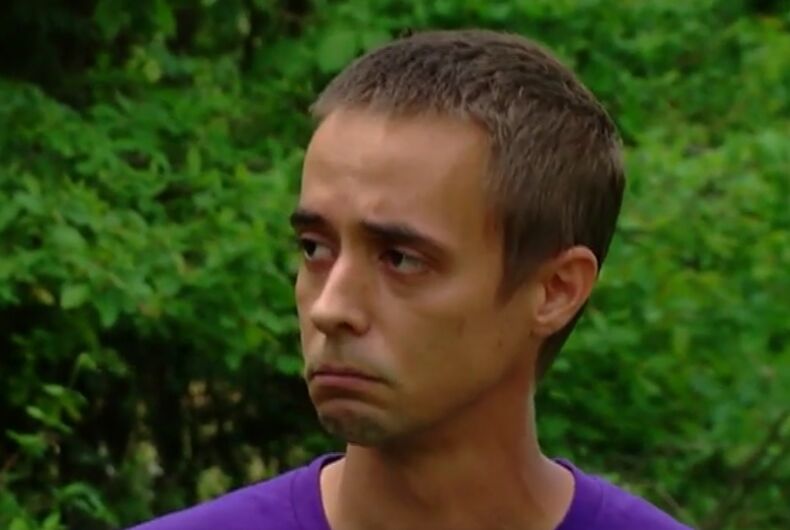 A man in Ohio has been shouting slurs at his gay neighbors, shooting them, and torched their car.

Nathan Paris and his partner moved to Brown County, Ohio, in 2012, where they lived in a converted shipping container they converted to a home. Paris said that they didn’t have a problem with anyone in the area for a while.

“We shouldn’t have to go through this kind of stuff,” Paris told Local 12. “We’re not bothering nobody. We’re keeping to ourselves. We don’t harass anyone. We don’t bother anyone. We’re just ourselves. That’s all we are.”

They moved away for a while and moved back this past February, and one of their neighbors started harassing an attacking them.

“He was saying ‘fag,’” Paris said, explaining that they were standing across a stream from the neighbor.

“I said, ‘Yeah I’m a fag. You got a problem with it?’ And he just kept going and calling me ‘fag’ and ‘gay’ and ‘queer.’ That was the conversation at that point.”

Later, the neighbor allegedly turned their car over. Paris and his partner called police, but the neighbor said that he didn’t do it, according to a report.

On May 18, the neighbor started shooting at Paris and his partner. They caught the shooting on video.

“We heard the bullets going by our head,” Paris said. “It was terrifying. We didn’t know what to do. We jumped down on the ground. We were hiding. We called the police as soon as it happened.”

Police came out to where they lived, took a report, but refused to arrest the neighbor. When the neighbor started shooting again several hours later, the police came back and arrested him… for drunk driving.

This past week, Paris found that the car that was turned over had been burned.

“Oh no. Oh my God, it’s burnt. He burnt it. Holy shit, that was yellow. He caught it on fire,” Paris shouted when he saw the car had been torched.

“We’re going to make it through this,” Paris said on the phone to his audibly upset partner. “It’s all right. It’s just a car. It’s all right. We’re alive right?”

Police said that they’re hoping that the neighbors can learn to “get along.”

“Hopefully it ends with the neighbors learning how to get along with each other,” Chief Deputy Chris Hodges told Local 12. “If it doesn’t and continues to escalate, it’s going to end up with some getting criminally charged or possibly incarcerated.”

Hodges did not explain what would be considered an escalation in this situation, considering the couple has already been shot at.